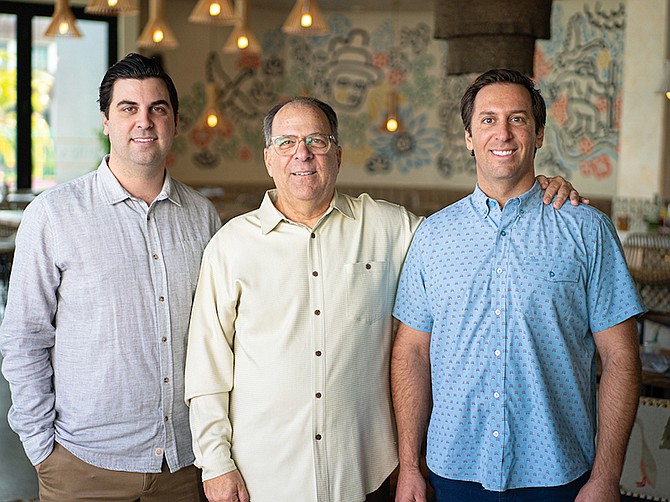 Five years ago, inspired by their creative juices and also their growing families, brothers Ryan Ross and Brandon Ross decided to take a page out of their father’s, local restaurateur Chuck Ross’, book and launch their own restaurant. Officially opened Feb. 2020, Carte Blanche Bistro & Bar is Oceanside’s first and only French Mexican concept, according to the siblings. And, while only open for dinner daily for now, is already serving roughly 1,000 people a week.

As a result, the 4,200 square foot Carte Blanche, which sits 180, is projected to reach $3 million in revenue by the end of the year, according to the brothers.

Planning for the Future

“Five years ago we thought, we should start planning for the future, it is time to get more serious and open a concept outside of the state park,” said Brandon Ross, the younger of the two brothers at 31. One of his father’s businesses under the family’s Old Town Family Hospitality umbrella, for which Brandon Ross is operations manager, is Old Town State Historic Park’s largest concession, Fiesta de Reyes, a complex of shops and eateries. “It really is family planning as much as it is our creative (juices flowing) as well.”

At first, the Ross brothers thought the concept would be more of a traditional Mexican style restaurant with a contemporary twist, said Brandon Ross. But, after realizing it didn’t fit well with their vision and doing some research on the history of Mexico, which has strong French influences, they shifted gears and opted for a French Mexican approach.

Chef Alex Carballo, who is a French-trained chef born in Mexico, initially had thoughts of consulting on the project. But, after learning of the planned French Mexican focus, jumped at the opportunity to man what promised to be a very fun, new and inventive kitchen, said Brandon Ross.

“It’s a natural pairing, more natural than a lot of people first think,” said 35-year-old Ryan Ross, who also still works as director of operations at his father’s Old Town Family Hospitality group. “Traditionally in the kitchen, when trained and learning, French style of cooking is what you are taught. What we do in the kitchen, from a technique standpoint, is very French. But we take it a step further and incorporate ingredients in new and creative ways. We are combining flavors and dishes from one culture to another and surprising the palate.”

For example, Brandon Ross said Carte Blanche’s menu features escargot tostadas, which use a classic French technique to sauté the escargot, which is then eaten on a Mexican tostada shell. There’s also the duck mole tacos, said Brandon Ross, for which the duck meat is cooked slowly in its own duck fat, the bone is used to make stock that is then used to make the mole sauce, and the duck skin is made into chicharron for an added crunchy texture, said Brandon Ross. It looks like a regular mole street taco at first glance, he said, but the way it is prepared is a true Bistro fashion and utilizes the French technique of confit, which is a French word that means “to preserve”.

Ryan and Brandon’s dad, Chuck Ross, a local businessman who has been credited with reinvigorating Old Town after he took over the San Diego State Historic Park contract 11 years ago, said he couldn’t be prouder of his sons’ career choices. “(My wife) Gail and I are content with the business we have today, and we’ve been very happy that my sons and their wives made the choice to join our family business,” he said. “But, with that comes a big responsibility for my wife and I to do everything we can for our kids to help them reach their goals for a secure future. Their incentive is to grow the equity and to make Carte Blanche as big of a success as possible. Other opportunities will grow from this first step.”

Michelle Geller, economic development manager for the City of Oceanside, said a new and inventive concept like Carte Blanche is not just providing locals with more culinary options, but also helping grow Oceanside as a food destination.

“Obviously we have a plethora of Mexican food in San Diego but we have much fewer restaurants that are French focused,” she said, adding the Petite Madeline Bakery might be the only other French-inspired offering in Oceanside. “Having a (French Mexican) fusion is cool, the atmosphere is great and the décor is well thought out… it gives that added layer of interest (to the city). You can come have a meal, walk around and see public art, maybe even an artist’s studio. It adds to people’s experiences.”

Inside, Carte Blanche, which was funded by the Ross family, is described as an eclectic French Mexican farmhouse, said Ryan Ross. It has warmth and unique colors with a big bar as the focal point, communal style dining and more traditional bistro restaurant dining in front of a glassed-partitioned kitchen, he said, adding that the patio sits 50.

While they continue to grow Carte Blanche’s influence and reach, the brothers are already thinking about what their next step might be.

“We looked for five years for this location, so, it just depends on what becomes available,” said Ryan Ross about the possibility of opening another location down the line. “Our dad is fully involved and is a great mentor and guides us along a positive path. We are very risk averse as a family company … to ensure we minimize risk.”