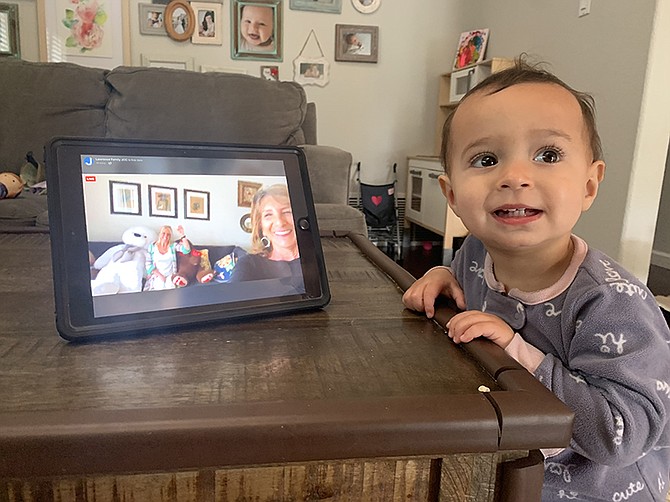 Photo courtesy of the Lawrence Family Jewish Community Center. In the wake of shelter-at-home and social distancing requirements, the JCC has launched the “J Virtual Experience,” according to CEO Betzy Lynch.

In the wake of shelter-at-home and social distancing requirements, the JCC has launched “J Virtual Experience,” a multitude of online video offerings for both members and non-members including arts and cultural productions, fitness workouts and family tips and resources as well as giveback opportunities for the most vulnerable in the community. The clips will air via social media as well as live through video conferencing applications, said Betzy Lynch, CEO of the 75-year-old organization, which has an annual operating budget of about $12.5 million.

“Within a very short period of time, we created a response plan at the beginning of March when we knew what was coming down the pipeline,” said Lynch. “We asked ourselves, ‘how can we translate the great work we do inside the walls of the JCC on a daily basis into a virtual program’ as people were beginning to isolate at that time. We tapped into the technology that allowed us to share the virtual program that we have created through video and live engagement.”

Lynch said the JCC is offering story times on Facebook Live daily at noon, “QuickFit” fitness lessons that include yoga and barre classes, and has also released archived videos of its “JCompany Youth Theatre” performances, like Disney’s “Beauty & the Beast” and “Lion King Junior”, the latter which provides a nice alternative to cartoons, she said. Additionally, the organization has launched a couple of initiatives with the elderly population of San Diego County in mind, said Lynch. This includes “Adopt a Grandparent,” a program through which kids from the JCC school, Nierman Preschool, send pictures and write letters to those living at the Seacrest Village retirement community in Encinitas, she said.

As well, a campaign called “Hope Calling” also kicked off, Lynch said, through which JCC employees make calls to all of its senior members a number of times a week to provide them with resources and assistance. This may mean grabbing groceries or medication at the pharmacy, she said, or connecting them to additional food services if it is needed.

“We will do that at least a few times a week, where we call the senior population to provide support as they continue to be isolated,” she said. “Because, that can have a negative impact on their mental health.”

As well, the JCC has partnered with the Boys & Girls Club of Oceanside, for which it has begun building a library by way of donated books – a bin sits behind the JCC building, where they are sanitized upon arrival, said Lynch. And, for the week of Spring Break, the JCC offered a series of virtual camps through Zoom Video Communications remote conferencing service, she said, and conducted by JCC teachers. For $15/day, kids are engaged in their choice of themed camps for 90 minutes per day. It is the only program currently being offered by the JCC with a fee, Lynch said.

Miro Copic, marketing professor at San Diego State University, said it is important, especially for community-focused, membership-type of businesses like the JCC, to show value to their customers during this time, especially because many of its members may be financially strained as a result of the crisis.

“The JCC is a physical fixture, a community leader, so they are going to try to mimic what they offer physically online, which is great,” he said. “What is great about the JCC is that they’ve always been very multi-generational. They think of seniors all the way down to the kids. If I can engage my entire family, I will be entirely appreciative as a consumer. These organizations are always very community oriented and so now their virtual offerings are an extension of who they are as a brand.”

He added that the temporary shift in business model allows companies to be innovative and think outside the box. He also said it is commendable that the JCC is attempting to help the community stay physically and mentally healthy during quarantine orders.

“What the JCC is doing is trying to find ways to make sure people that are sheltering in place actually have the ability to stay physically and mentally challenged,” Copic said. “Whatever the engagement is, that is extraordinarily appreciated. The JCC is extending its activities to the home as opposed to having people come into their facility, and that is very powerful. People will be grateful at every level. They are engaging people in a way that is going to build those positive feelings toward a brand. Any organization that does that will have more loyalty when they come out of this.”

To spread the word on the JCC’s virtual engagement program, Lynch said it is marketing on Facebook, Instagram and all social media platforms. She said, as of press time, all 300 of JCC’s employees are working remotely and getting paid. Lynch added that, through the new legislation and via a sizable fundraising effort, she hopes the organization will be able to maintain its staff with a reduced compensation package without laying anyone off. It would take a massive fundraising round on the JCC’s part in a short period of time, she said, but she is optimistic that the JCC can provide economic stability for its team.

The immediate goal, though, is to help the community stay strong in body, mind and soul during the coronavirus pandemic and beyond, she said.

“I read an article in The Atlantic Magazine that said there would be a secondary wave of the pandemic that has less to do with the physical but more so the mental health of people attempting to recover from this,” said Lynch. “The work we do at the JCC is to help people survive as human beings in their everyday lives. We do it in the context of Jewish values, but it is universal across all communities. More than half of the people that attend the JCC are of faiths other than the Jewish faith, or no faith at all, and that is absolutely fine with us. Our goal is to engage the entire community. And, what is exciting about going virtual is that there is no longer a geographical barrier. If you live in Oceanside, you can do a JCC program, which you really couldn’t do before. That is the silver lining.”