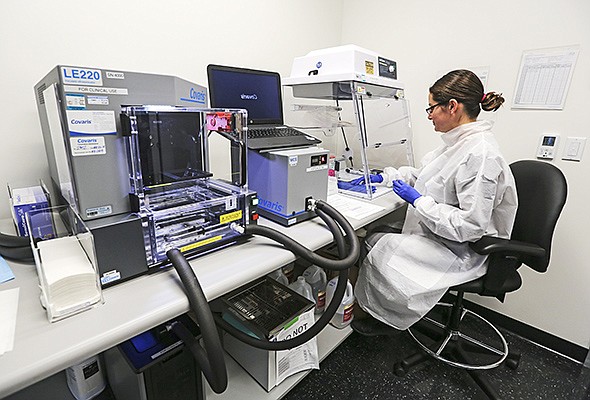 The technology trains a computer to perform tasks normally requiring human intelligence, in what promises to increase efficiency and lower costs. But hospitals must also be mindful of unintended consequences.

AI has recast industries, from manufacturing to software design, while the technology isn’t yet widespread in hospitals. They’re sitting on ever-larger amounts of data ripe for AI.

“It’s just not sustainable to introduce new, highly expensive technologies into health care without figuring out how to deploy them in a way that saves costs,” said Dr. Stephen Kingsmore, CEO of Rady Children’s Institute for Genomic Medicine.

Now, Rady is leading a $2 million Medi-Cal pilot gauging whether genetic sequencing delivers on care and costs. It involves Rady sequencing tough-to-diagnose babies at its hospital and three others. Positive results may convince Medi-Cal, which insures low-income Californians, to pay for quick-turnaround infant testing. Medi-Cal reimbursement would likely convince insurers to get on board as well.

Rady pioneered rapid whole-genome sequencing, which looks at a person’s entire set of DNA. Last year, the hospital and partners like San Diego’s Illumina sequenced a newborn’s genome in only 19.5 hours, a Guinness World record.

“There were a couple cases where the human interpretation had failed to give a diagnosis, which we found by our AI-based method,” Kingsmore said. “We know that humans aren’t perfect.”

Kingsmore sees AI freeing up time for physicians to focus on patients. Fitting then that the Rady genomics institute was featured in “Deep Medicine: How Artificial Intelligence Can Make Healthcare Human Again,” a new book written by Eric Topol, director of Scripps Research Translational Institute.

Topol contends that overwhelmed physicians can benefit from AI, whether medical scans or diagnosis and treatment.

But for hospitals, AI could pose a risk. A March article in the journal Science warns machine-learning vulnerabilities allow subtle input changes that can spoof medical results or produce false medical claims.

The researchers, led by Samuel Finlayson from Harvard Medical School, called for a cross-section of policymakers to tackle the subject.

“Far from discouraging continued innovation with medical machine learning, we call for active engagement of medical, technical, legal, and ethical experts in pursuit of efficient, broadly available, and effective health care that machine learning will enable,” the authors wrote.

Sharp HealthCare guards against AI pitfalls in a few ways. They include layered security, software detecting when AI models have been altered, and educating physicians on AI’s role.

At Sharp, an algorithm baked into electronic health records identifies and predicts sepsis, a life-threatening response to infection.

Sharp is also working on an AI model that flags patients most likely to be readmitted, based on 18 characteristics, like number of emergency room visits and relationship status. After discharge, Sharp would call to check on their health.

McManus said getting physician buy-in requires “explainable AI” — both displaying scores for those at risk of readmission, as well as how the score was reached.

“This is a real fast-moving, multifaceted area for Sharp. And it certainly has our upmost attention,” said McManus.

Getting All the Data Pieces

But compared with tech firms like Google, hospitals can have a tougher time leveraging AI for insights. Regulations sometimes keep hospitals from obtaining key data pieces, according to Heather Nelson, a senior manager with Deloitte Consulting.

“Each of them (hospitals) have a part of the story, not the whole story,” said Nelson.

To connect the dots, Nelson said hospitals turn to a growing number of outside vendors that supplement in-house infrastructure. These vendors offer other data services as well.

For instance, San Diego’s Optum360 contracts with hospitals to reduce physician data entry that cuts into doctor-patient time. (Optum360 is a division of OptumInsight, itself part of Minnesota insurance behemoth UnitedHealth Group.)

Scripps envisions a hospital center that processes streams of data from glucose monitors and other devices. Algorithms would detect anomalies and notify physicians.

Such hospital command centers, staffed by small teams, are popping up around the U.S. and Europe.

“That’s an area where I believe the infrastructure we’ve laid as a foundation is finally going to start to be beneficial to the consumers in a way that’s very different,” said Andy Crowder, chief information officer at Scripps Health.

Algorithms have long been part of health care. But Kingsmore of Rady Children’s said AI has gotten more eloquent, heralding a new era.

“I think it’s just like the tide coming in, it’s inevitable,” he said.