The Port of San Diego has chosen a developer to build and operate a new shared pod hotel near the San Diego Bay. Stay Open, the selected developer, is a partnership between Los Angeles-based Care Development LLC, and New Zealand-based Jucy Snooze. According to a news release, the shared pod hotel concept is expected to be one of the first of its kind in the country. 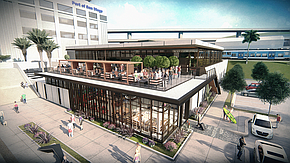 In January, the Port began its search for the right developer for lower-cost overnight accommodations through a proposal process. By March 7, three complete proposals were received, including one from the Stay Open team. It was Stay Open's idea to create a “shared hospitality” pod hotel, which are marketed to budget travelers and features shared rooms with multiple pods and a shared bathroom, according to the release.

The Stay Open hotel will feature:

Six private Ensuite rooms with queen and twin beds and with private bathrooms;

A rooftop space with a restaurant and bar which will be open to the public.

“Stay Open’s innovative ‘shared hospitality’ concept really stood out, as it is geared towards the traveler that is looking to stay in prime locations without breaking the bank or sacrificing the experience,” said Garry Bonelli, chairman for the Port of San Diego Board of Port Commissioners, via a statement.

The shared pod hotel will be located on Pacific Highway between the port’s administration building and Palm Street.