The lobby in Viasat’s new East Campus building has about 50-feet-tall ceiling. Photo by Joel Zwink 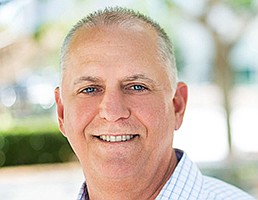 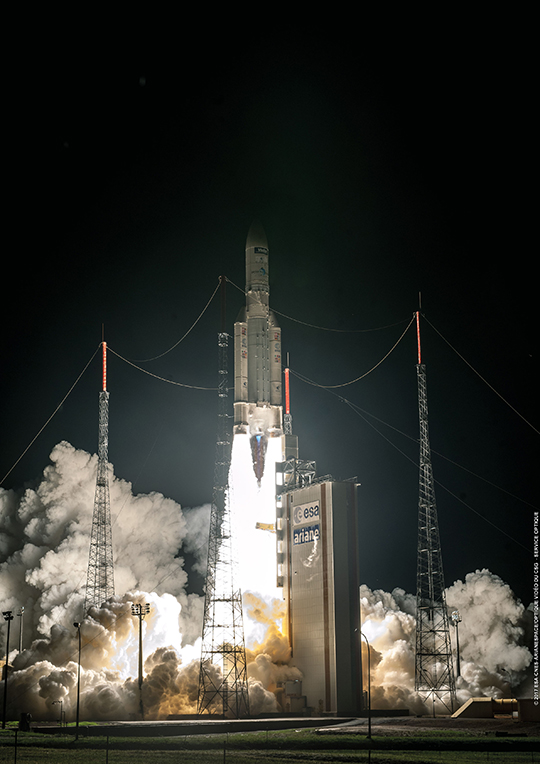 The ViaSat-2 satellite begins its journey into space atop an Arianespace rocket in 2017. Photo by Service Optique CSG courtesy of Viasat Inc.

Company description: Global communications company, providing broadband internet via its network of satellites, as well as communications technology to defense and government agencies.

Revenue for Viasat Inc., the Carlsbad-based broadband internet service provider and government contractor, has shot up over the past decade like the communications satellites the company designs and launches into orbit.

Just over 10 years ago, Viasat’s annual revenue stood at $516 million, and that number has quadrupled to about $2 billion in calendar year 2018. Currently, the company has some 5,500 employees at 28 offices around the globe, including the U.S., Asia, Europe, Australia and Israel, according to the company website.

One reason for that dramatic growth, said Rick Baldridge, Viasat’s president and chief operating officer, was a decision announced in 2008 that Viasat would build and launch its own satellite to provide broadband internet service.

“A lot of our growth has come from investing in assets like satellites that generate recurring revenue,” said Baldridge.

About half of the company’s revenue comes from providing internet service to a variety of markets, including homes, businesses, commercial airliners and government aircraft and installations, said Baldridge, while the other half comes from the technology sold to defense agencies and other government clients, including encryption equipment and communications devices for military fighters.

From the beginning, Viasat was a game-changer in the realm of satellite communications. Its first satellite, dubbed ViaSat-1, was launched in 2011 and was listed in the Guinness Book of World Records for having twice the capacity of all other communications satellites combined at that time, Baldridge said.

The next generation, ViaSat-2, provides coverage for North and Central America and Europe (the latter through a partnership with Eutelsat, a European company).

The company is now working on ViaSat-3, a “constellation” of three 1-terabit-per-second satellites that will be launched beginning in 2021, said Baldridge, which will offer broadband internet service across the entire globe, with the exception of the North and South poles.

Along with its technology expertise, Viasat is also seeking and developing new markets for its internet services. In addition to its services for homes, businesses and government agencies, Viasat is expanding its footprint in the commercial aviation space, with its internet service being provided to passengers on Jet Blue, United Airlines and American Airlines.

The company also has developed a community Wi-Fi service, first rolled out in Mexico, in which broadband access is available to some 1.5 million people through a network of Wi-Fi hotspots, for a charge of about $3 to $4 per month, Baldridge said. The idea is to create a service that can be replicated in places where internet service has not been available to large swaths of the population.

“We can literally help change the lives, we believe for the good, for a large part of the world and do it profitably; that’s the mission we’re on,” Baldridge said.

Looking to the future, Viasat’s plan “is to keep building bigger and more powerful satellites,” said Rich Valera, managing director and senior analyst with Needham and Co., and to keep finding new markets for its services.

While the company has endured setbacks in recent years, from launch delays by its partners, to an antenna that did not deploy properly on ViaSat-2, to the collapse of a deal with Eutelsat to fund a large share of ViaSat-3, a lot has gone right over the past decade as well, said Valera.

That includes the dramatic growth of its internet broadband business and development of technology that offers greater bandwidth at a lower cost than its competitors in the satellite communications business, said Valera.

Mike Crawford, senior analyst with B. Riley FBR Inc., based in Los Angeles, said that over the next 10 years, he expects Viasat to continue the success it has seen since its founding in 1986.

One example of the company’s ability to disrupt markets is in in-flight internet service, where Viasat has captured nearly 100 percent of new installations on commercial aircraft over the past year, Crawford said.

“They are building a global communications network that will offer an abundance of high-speed data in hard-to-reach places all over the globe,” Crawford said, at attractive prices for end users and attractive margins for the company.