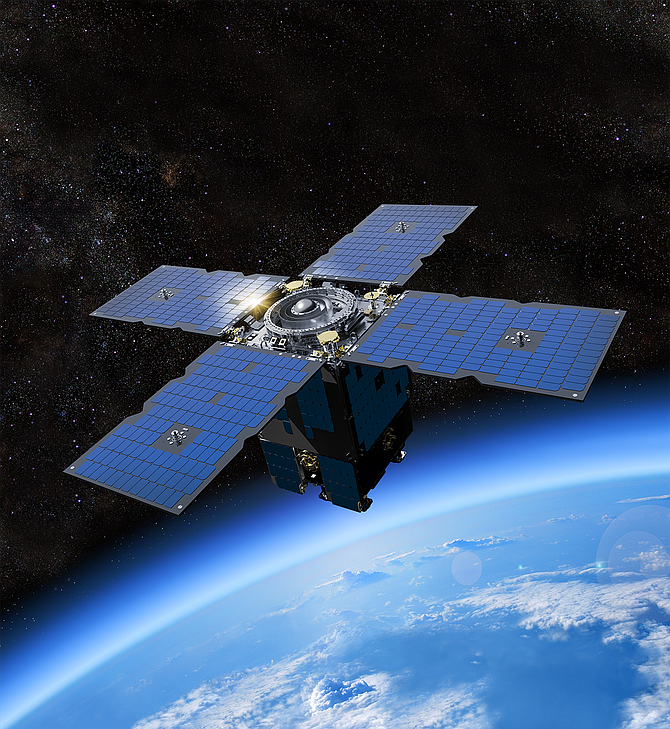 An artist's rendering shows an Orbital Test Bed satellite similar to the one that will carry the Argos Advanced Data Collection System into space. Rendering courtesy of General Atomics Electromagnetic Systems.

General Atomics has received a contract to help launch a satellite for an international program. The San Diego business’ Electromagnetic Systems unit made the announcement Jan. 3.

GA-EMS did not specify the ceiling price for the indefinite delivery, indefinite quantity contract.

The deal calls for GA-EMS to launch a 242-pound Orbital Test Bed satellite. Prior to that, the business will integrate an Argos Advanced Data Collection System payload provided by the French Space Agency.

Argos is an international program that collects data from thousands of sensors and transmitters around the world. Currently, data is collected and distributed for use in numerous applications, including ocean buoy tracking, wildlife and fishery monitoring, and maritime security.

The contract award came from the U.S. Air Force Space and Missile Systems Center, working on behalf of the U.S. National Oceanic and Atmospheric Administration.

General Atomics is privately held. Its headquarters are in the Torrey Pines neighborhood near UC San Diego.