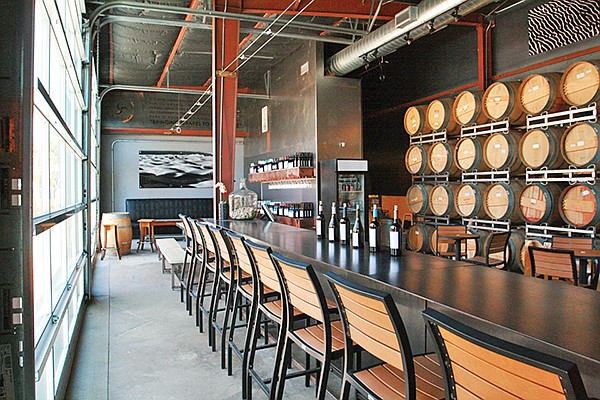 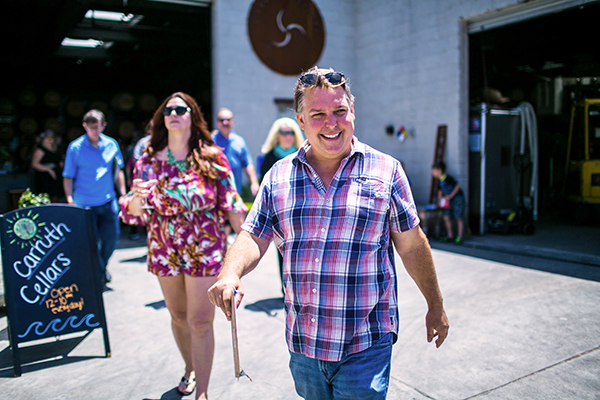 Adam Carruth launched Carruth Cellars in 2006 and has since grown it to three locations in the county and approximately 45 employees. Photo courtesy of Carruth Cellars 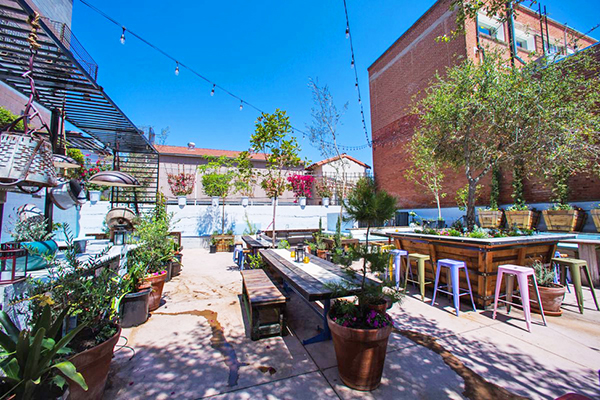 In fact, when he launched Carruth Cellars back in 2006, part of the motivation behind it was to “work against the establishment.”

“Wineries are forced to sell to distributors and restaurants, which want to get the wine for very cheap,” said the 47-year-old. “This was all happening during the beginning of the recession. We were trying to sell cases for $200 and make a profit, but, smaller companies like mine were getting squeezed out. Most wine is pushed through that system. So, for me, it made a lot of sense to just go straight to the consumer and bring the highest quality wine we could 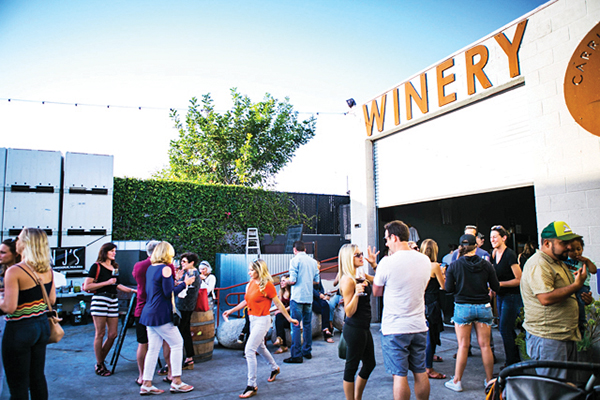 The 5,000 square-foot-headquarters in Solana Beach of Carruth Cellars Urban Winery, which launched in 2006, is where all the wine production, fermenting and bottling for the company takes place. Photo courtesy of Carruth Cellars

afford to the people.”

Today, Carruth, with approximately 45 employees, touts itself as the largest urban winery in San Diego. It has three locations in the county: the 5,000 square-foot headquarters in Solana Beach, where all the wine production, fermenting and bottling takes place; a 2,000-square-foot tasting room in Carlsbad that opened in 2016; and a 3,000-square-foot wine garden in Little Italy that premiered in 2017.

In 2017, Carruth Cellars processed 140 tons of grapes, which it sources from Northern and Central California. Last year, it increased production to 285 tons. The company’s gross revenue in 2018 was approximately $3.5 million, according to Carruth, a 50 percent growth from the previous year.

Carruth Cellars’ steady progression is indicative of the continual growth of the urban winery scene across San Diego County. There are 117 wineries in the county, according to the San Diego County Vintners Association (SDCVA), of which Carruth is one of the largest based on a combination of square footage and production. According to the SDCVA’s Economic Impact of Wineries 2017 report, the San Diego wine industry generated a $30.4 million regional economic impact in 2016 and supported 697 jobs in the county the same year.

Ed Embly, president of the SDCVA, said between 2016 and 2017, the economic impact of the wine industry in San Diego grew by 40 percent.

Carruth Cellars will be a major player in that growth, added Embly, stating the company is a leader in the urban winery movement in San Diego.

“He has certainly set the bar high both in size and in his growth rate,” said Embly. “Adam has made some really good wine. He is very respected in this industry and he is really good at what he does.”

Going straight to consumer has worked well for the company. Its main method of sales is through its wine club and selling directly to visiting patrons at its three venues, said Carruth. As part of the wine club, which uses the tagline “bringing grapes to the people,” members get one bottle a month for $39.99, and, for $240 bi-annually, members receive six bottles twice a year.

Another advantage for the business has been its working hours. While most wineries close at 5 p.m., Carruth said he does most of his sales between 5 p.m. and 10 p.m. It made sense to stay open past standard hours, he said, because “people that work and want to grab a drink after work usually get off at 5 p.m.”

Before the winery, Carruth actually dabbled in the craft beer scene, brewing his own beer for six years in the ’90s. He said he didn’t go into that line of work partially because he wasn’t getting the encouragement from his parents to do so, mostly because they “weren’t excited about me messing up the kitchen.”

In the early 2000s, Carruth worked at Witch Creek Winery in Carlsbad, and, although the company didn’t really brand itself as an urban winery, he said, it technically was. And that’s when he first got inspired to step foot in wine-making.

“They were bringing grapes down here from vineyards,” he said. “My company is really a copy of that.”

Thankfully, when he began experimenting with wine, his parents seemed more supportive of that idea. The reason for the backing was because, unlike beer, you only make wine once a year, said Carruth, which meant less cleaning up for the matriarch of the house.

While his parents’ approval was important, Carruth didn’t depend on mom and dad for financial backing to kick off Carruth Cellars. Instead, he used money he made in real estate in the mid-2000s to launch the business. “I was putting all of my money into buying barrels and grapes,” he recalled.

Plans for Next Production Facility

In coming weeks, Carruth hopes to put his cash into something else to continue the growth of Carruth Cellars: another large production facility. The company has outgrown the Solana Beach space now that it has three venues and demand has increased. Carruth said he recently connected with a company in Oregon that is selling fermentation tanks, which he has purchased to help in the meantime.