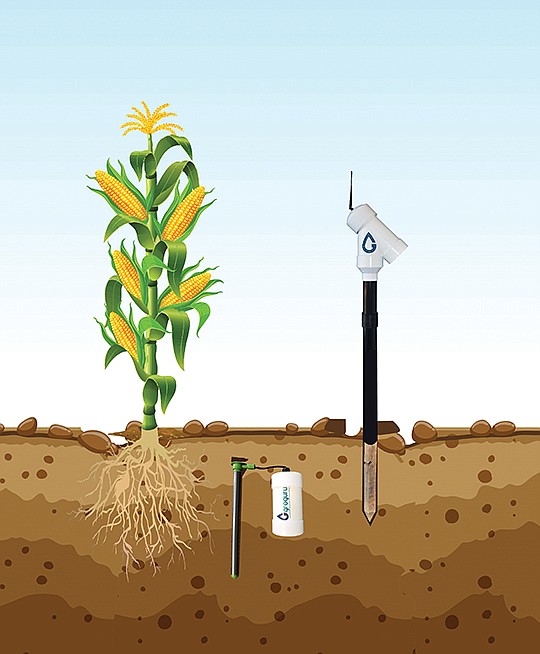 GroGuru’s sensors are buried in the ground near the roots of plants, where they can provider growers with information on soil moisture and salinity. Image courtesy of GroGuru

Bright green avocado trees dot the hills surrounding San Diego County, while tens of acres of multicolored ranunculus flowers bloom each year in Carlsbad. These products are big contributors to San Diego’s agricultural sector, which brought in more than $1.7 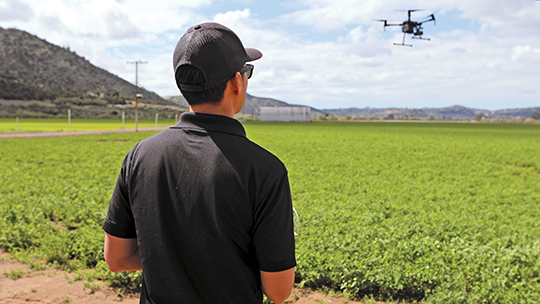 Above, SlantRange designs sensors and software that can be attached to drones to gather information about crops. Photo courtesy of SlantRange

Behind these farms are a growing number of tech companies aiming to help solve some of the biggest challenges in agriculture. They aren’t just driven to San Diego for the good weather and the variety of crops that grow here. Many of their founders have roots in one of the area’s tech giants, such as Qualcomm Inc., Illumina Inc. or General Atomics, with a bumper crop of incoming talent from San Diego’s universities.

“It’s mostly about irrigation technology,” he said. “Water is very expensive and growers are sensitive to the amount of water they use.”

Reducing waste is another big source of savings. While the weather has gotten easier to predict, Larson said farmers would want to know if a storm was approaching to avoid overwatering plants. Other technologies are used to avoid the overuse of fertilizers and pesticides.

Finally, Larson said, farmers also face a shortage in workers to help plant and pick crops. Robots haven’t yet taken over the harvest, but some greenhouses, where San Diego’s vast crop of nursery plants are grown, have found ways to automate planting and soil mixing.

“We have a serious labor shortage, that’s driving the desire to mechanize,” he said. “We don’t have a lot of solutions to that yet.”

San Diego’s tech startups are working to make the process of growing the food on our tables more efficient. From feed crops to organic produce, these companies see an opportunity to earn a stake in the farms of the future.

He co-founded GroGuru, an agtech company that buries sensors in soil so they can measure its moisture and salinity. Farmers can use this information to determine if their crops are being overwatered, if the soil salinity is too high, or if the fertilizer is being washed into groundwater.

No. of local employees: Nine

Anjum, who has a bit of a green thumb, had the idea while planting a garden at his new house. He wanted to use sensors to grow the best garden possible, but he didn’t find any devices that worked well. So, he created his own.

At first, Anjum thought to sell the sensors to other home gardeners, but he quickly found commercial growers were much more interested in the product.

He said the solution can save farmers money — up to 20 percent in water savings — and lead to better crop yields. These factors can also affect the taste of the food, he said.

For example, in June, Anjum sampled some cherries at an orchard in Washington.

“Those were some of the sweetest cherries I had tasted in my life,” he said.

But a stop at a different farm in San Jose yielded different results.

“There was no taste,” Anjum said. “The problem is they applied a lot of water. If you don’t apply the right amount of water at the right time, that’s what happens.” 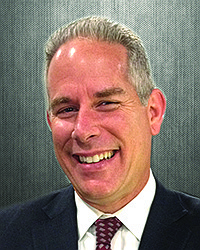 Company description: SlantRange builds sensors and software for drones that growers can use to monitor the health of crops.

Anjum currently serves as chief technology officer of GroGuru. It was through a mutual friend at his most recent job, at OnRamp Wireless, that he met investor and GroGuru CEO Patrick Henry.

“The idea, I thought it was a good one,” Henry said. “It just looks like a massive opportunity. There are other people in the market, but there isn’t an established large player.”

Without farmers needing to dig up and bury the sensors every planting and harvesting season, Henry said it could differentiate the company from its competitors. It also gives them the opportunity to collect more consistent data.

“I think it has the opportunity to open the bigger part of the market that the other competitors have not been able to crack yet,” he said. “For annual crops, especially field crops … you really need a solution that can be permanently installed to open up the market in a big way.”

The company currently has six farms using its product. Henry hopes to expand to an additonal 25 this spring, with anticipation of a bigger ramp-up next fall. The company is on target to hit $200,000 in revenue by the end of the year.

GroGuru’s team of nine is currently housed in local tech incubator EvoNexus. Henry said the startup is currently raising funds to help fuel the company’s growth by hiring engineers and building out its sales channels.

As with his company, Anjum said his home garden had also begun to bear fruit. He planted a pomegranate tree, for his wife, and tomatoes for himself.

“We had some nice tomatoes this year,” he said.

Change Is in the Air 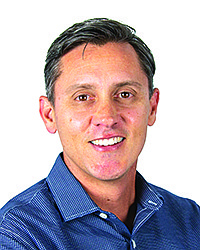 San Diego-based SlantRange also uses sensors to provide growers more information about their crops. But instead of being buried underground, SlantRange attaches its sensors to drones that circle over fields.

The six-year-old company has its roots in General Atomics, where co-founders Mike Ritter and Mike Milton worked on the Department of Defense’s Predator drones before realizing the technology could have a commercial use.

While the company has clients across the globe, Ritter said SlantRange’s San Diego headquarters allow it to test its products year-round, and access a pipeline of solid engineering talent.

“UCSD and Scripps Institution of Oceanography have a lot of talent in remote sensing,” he said. “There are a lot of remote-sensing scientists and talented people between those.”

Traditionally, most farms apply herbicides or pesticides across an entire field. But these chemicals still frequently miss their targets.

SlantRange’s tech can help farmers pinpoint problem areas by looking for plants that are under stress.

When plants are fighting against a nutrient deficiency or a pest infestation, they begin shutting down photosynthesis, making for less chlorophyll in the plant. SlantRange’s sensor detects the concentration of chlorophyll in plants by picking up the color of the plants by how light bounces off of them.

The tech can also pick up on visual cues, such as how many heads of lettuce there are before a harvest, or if untidy weeds are growing amongst orderly plants.

Ritter and Milton first began testing the concept back in 2013. At first, they had tried to grow corn in the backyard of their first office, but poor soil left six wilted plants.

Milton suggested testing the system on his family’s corn and soybean fields in Nebraska.

“They (family members) were amused with the concept of a hobby drone flying around the fields. But when we showed them the data, they got interested quickly,” Ritter said. 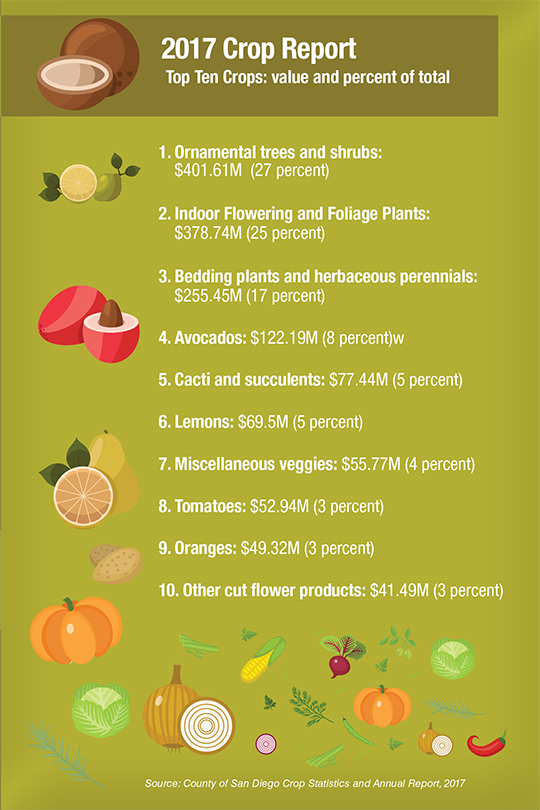 Since them, SlantRange has quickly grown its business. The company currently has customers in 45 countries, and several big clients, including Bayer CropScience and Syngenta. Locally, the company works with alfalfa growers in the San Pasqual Valley, that allow SlantRange to test its systems.

“We started working in corn and soybeans. We had a strategy going after this, with fields that are so big that humans can’t go and reasonably inspect them,” Ritter said.

Since then, growers of specialty crops that take less acreage, such as fruits and vegetables, also began buying the product.

More recently, his company has struck partnerships with drone manufacturer DJI and Microsoft, which is providing analytics and data security capabilities. In the long term, he hopes to fully automate the process, with drones programmed to fly daily.

Pierre Sleiman, founder of Encinitas-based Go Green Agriculture, is building high-tech greenhouses that use less land, less water, and pose a solution for the scarcity of labor. And in the midst of it, he’s also trying to grow the perfect head of lettuce.

“I looked at what are all of these challenges, things that make agriculture not an attractive (job),” Sleiman said. “We attacked all of those things using tech.”

Sleiman dreamed up the idea in college, when a professor was sharing about his work with NASA to grow lettuce on the international space station.

Seeing the amount of effort and technology that went into growing lettuce in space, Sleiman asked, “Why are we not doing those things here on Earth?”

He built the first prototype in his garage in college. Since then, the company has grown into a large hydroponics operation, supplying leafy greens to major San Diego grocery stores including Whole Foods, Vons and Barons Market.

Sleiman opened his first greenhouse in Encinitas with the goal of growing the perfect head of romaine lettuce.

“We put all of our resources, every dollar to R&D, into romaine,” Sleiman said. “That was where we placed our bet four years ago.”

Each farm is about 20 acres, built in a fully climate-controlled greenhouse.