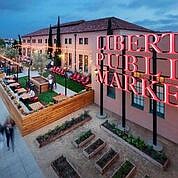 A big chunk of Liberty Station has been sold by The McMillin Co. to Pendulum Property Partners based in Irvine in partnership with The Seligman Group based in Michigan.

The purchase price was not disclosed.

McMillin will continue to own one hotel site, two hotels under construction and some office space.

Pendulum Property Partners said in a news release that they planned on “upgrading the tenant mix as leases expire” and making improvements to common areas.

“The end goal is to enhance the overall Liberty Station experience for the consumer and the surrounding community,” the company said.

The 360-acre former Naval Training Center was closed in 1997 and McMillin was awarded a lease by the city of San Diego to develop the property.