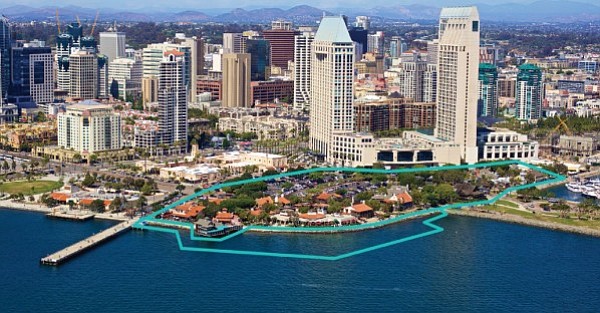 The Port of San Diego has issued a request for proposals, seeking a third party to manage and operate the site of downtown’s Seaport Village after its current lease expires on Sept. 30, 2018.

A port district statement said the aim is to oversee existing operations of the 14-acre shopping and dining complex on the Central Embarcadero. The current Seaport Village, a downtown waterfront staple since 1980, is slated to eventually be replaced by a larger new multi-use redevelopment to be carried out by a development team, known as 1HWY1, chosen last year by the port district following an earlier proposal process.

The current leasehold on the Seaport Village property, which was not renewed by port officials, is held by Carlsbad-based Terramar Retail Centers. Officials said prospective applicants can download the new request for proposals and other details from the Port of San Diego’s portal on the PlanetBids website.

The proposal submission deadline is Oct. 12.

In late 2016, the Board of Port Commissioners selected 1HWY1 – which includes local developers Yehudi Gaffen, Jeffrey Essakow and Jeff Jacobs – from among several applicants to carry out a redevelopment of the Central Embarcadero, a 70-acre area that spans the bayfront between the San Diego Convention Center and the USS Midway Museum.

Construction is not expected to begin until 2020 at the earliest. Planned new elements include hotels, stores, restaurants, offices, public plazas, a museum and observation tower.