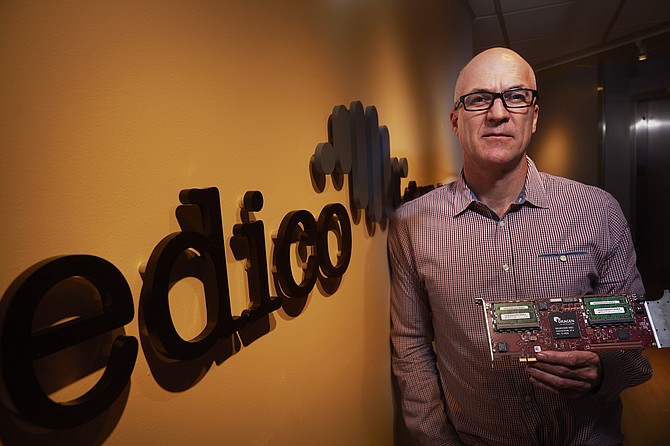 Pieter van Rooyen is CEO of Edico Genome, holding the company’s specialized microchip called Dragen. The processor speeds the analysis of next-generation sequencing of a genome. Photo by Stephen Whalen.

Bioinformatics firm Edico Genome Corp. has landed its third foundational patent, the company announced Thursday. The patent further secures the company’s core technology, and may ease the minds of collaborators considering new applications for the tech.

The patent broadly covers the technology at the core of the company’s Dragen Bio-IT Processor, which speeds up the secondary analysis of next-generation sequencing data (reducing the time required for analyzing a genome). The patent not only covers the Dragen hardware processing platform, but also how the tech is used (for genomic sequence analysis both onsite and in the cloud).

"The innovation of our Dragen Bio-IT Processor is reflected in our growing patent estate and, most importantly, brisk customer adoption seen in our first year of commercialization," said Pieter van Rooyen, CEO of Edico Genome, in a statement. "Our intellectual property position provides customers as well as collaborators assurance that they're engaging with best-in-class genomic data analysis technologies and can confidently explore with us additional applications and partnerships that leverage Dragen's unique data-crunching capabilities for onsite and cloud deployment.”

Edico Genome has announced several partnerships with technology firms over the last couple of years, most recently with IBM and Intel Corp.