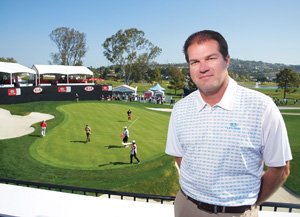 Dennis Baggett is director of the Kia Classic women’s professional golf tournament held at the La Costa Resort and Spa during the week of March 19. Sporting events such as this create a positive economic impact on the area that goes beyond hotels and restaurants.

Women’s golf gets nowhere near the media attention that the men’s game does, but last month’s Ladies Professional Golf Association Kia Classic broke some new ground when the Golf Channel let some of the competitors into the broadcast booth and behind cameras, at least for a few shots.

“We tried some different things to showcase the product, and I think it turned out well,” said Dennis Baggett, the director for the event which wrapped up at La Costa Resort and Spa on March 25.

As sporting events go, the Kia Classic wasn’t a blockbuster, but it was no small shakes either, Baggett said. “We had 49 of the top 50 women’s golfers on last year’s money (winnings) list, and drew fairly well on Thursday and Friday rounds, had an overflow crowd on Saturday, and not as well on Sunday because of the weather.”

While Baggett didn’t provide actual attendance, he said it was close to the 42,000 who attended the tournament the last time it came to La Costa two years ago.

Besides generating a full house at the Carlsbad resort, visitors filled rooms at area hotels and dined at local restaurants, and in general helped support the local economy.

It was the kind of sporting event that is repeated many times in and around San Diego County, which has a deserved reputation as one of the nation’s most sports minded cities, deriving significant economic activity from sports-related businesses.

Sports-related tourism is just one piece of the pie. Among other slices are sports equipment manufacturing, professional and amateur sports events, retail sales of sporting goods, all the parks, fields, pools, golf courses, tennis courts, gyms, hiking and bicycling trails, and let’s not forget the Pacific Ocean where folks here recreate with a passion.

“I guess professional sports is more visible to everyone and their impact, especially when something like a Super Bowl (last held locally in 2003) comes to town, is huge. But if you add up all the youth sports that we have going here, the impacts are tremendous,” said Kelly Cunningham, chief economist for National University System Institute for Policy Research.

An annual golf tournament in Carlsbad called Callaway Junior World Golf Championship had a direct economic impact of $863,000 in 2008, according to a NUSIPR analysis, Cunningham said.

The nonprofit think tank conducted a study of the local golf industry that same year that found aggregate revenue from all golf manufacturers (32), golf courses (90), tournaments and travel, merchandise sales, and related services was $2.6 billion. The local industry in 2008 had about 26,900 employees, the report said.

Just the tourism aspect alone, accounting for the thousands of visitors to professional, college, high school and youth sporting events held in the county would total in the “hundreds of millions of dollars,” said Al Kidd, president of the San Diego Sports Commission. Kidd said his group was attempting to determine the overall impact from the various aspects of sports businesses and events but so far, it’s a report still in the thinking stage.

The fragmentation that exists among all the varied segments connected to sports as well as privately run businesses and events makes getting any handle on the dollar impacts quite difficult, Kidd says.

But the impacts are sometimes abundantly clear. For example, an annual youth soccer tournament held at the San Diego Polo Club each summer called the Surf Cup generated a total impact over its five-day run in 2010 of nearly $17 million, according to the San Diego Surf Cup Inc., the nonprofit entity that runs the tournament.

Kidd says last year’s Surf Cup drew about 25,000 visitors to the area and accounted for about $11.6 million in spending on hotels, and $5.3 million on food and beverages.

The Rock ’n’ Roll Marathon that takes over San Diego every June is another big revenue generator for area hotels and eateries, Kidd said, with last year’s event resulting in more than 55,000 room nights (one night’s stay in a room). Actually the exact room nights last year were 57,926, and direct visitor spending caused by the marathon participants and their families was $34 million, said Dan Cruz, spokesman for the Competitor Group Inc., the sports and media business that manages the San Diego marathon and 57 other participatory events mainly in the United States.

The running demographic that does marathons is fairly flush, Cruz said. Last year’s entrants in the San Diego race, some 30,000, had a median household income of $112,000.

Kidd’s group is constantly on the hunt to bring new sporting events here and bagged a big one coming here for the first time from June 16-24 called the U.S. Police and Fire Championships, which is expected to draw some 12,000 out-of-towners here.

“They’ll be competing in everything from horseshoes to running, soccer, tennis and other Olympic-type sports,” Kidd said. “They signed a three-year deal with us, and our hope is that we do such a good job they’ll make it permanent.”

Lisa Freedman, executive director for San Diego Sport Innovators, a nonprofit group that helps fledging sports businesses and is part of Connect, said despite its reputation as a sports mecca with major concentrations in the golf, boating, and active sports (surfing, skateboards, and running) industries, the city isn’t a regular host for really big-time sporting events such as the college men’s championships, better known as the Final Four, which just wrapped up in New Orleans.

“Our biggest challenge is that we are facility challenged,” Freedman said. “If we were able to get a new (football) stadium and an arena with convention space, we could be attracting even more sports events to this town.”

When asked to estimate the overall impact that all the various aspects of sporting businesses and events have on the local economy, Freedman said she had no clue, but it’s something her organization is trying to determine.

“We’re tying to get people to do that (study), and National University was willing to do it, but they wanted $150,000, and we don’t have that in our budget,” she said.