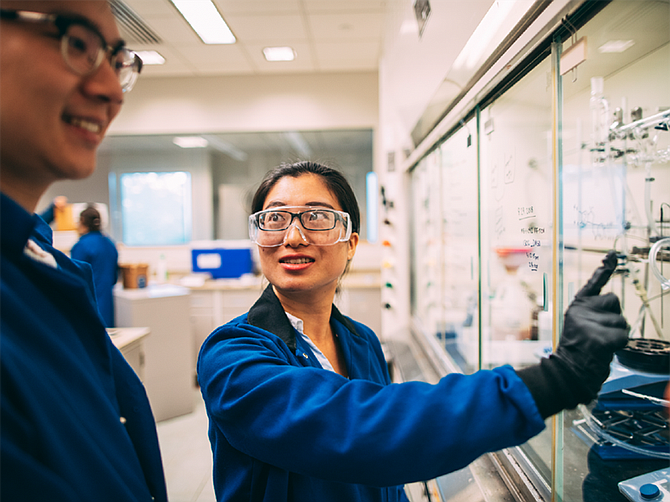 The technology licensed from Cornell University, is cyclodextrin micropollutants made from cornstarch, which helps to filter out nanoscale levels of hazardous per- and polyfluorinated alkyl substances and other micropollutants from drinking water.

Cyclodextrins comes in the form of a lemon-yellow powder which looks good enough to eat, however, it is odorless and tasteless. The yellow-colored material has been produced to provide affordable and safe water which is fundamental to healthy communities.

The four-year old company is getting increasing attention from renowned business associations, and is a finalist in the World Materials Forum 2020 StartUp Challenge. In addition, Cyclopure was nominated by the American Chemistry Society as a 2019 Top 10 Start-up.

“We’ve been impressed with the speed that Cyclopure has been able to optimize its technology for commercial use. They’ve shown great focus and expertise,” said Mark Harrison, WACKER Global Business Development Manager for cyclodextrins.

Per- and polyfluorinated alkyl substances (PFAS), a highly toxic type of micropollutant, have emerged as an urgent global health concern.

Composed of thousands of compounds, the chemicals have made their way into groundwater from a wide range of industry applications such as firefighting foam, packaging, textiles and non-stick pans.

Moreover, the chemicals have been detected in the air, soil, plants, humans, wildlife and aquatic environments. Cyclodextrins are carbohydrates, cost-effective, and come from a plant-based renewable resource.

The team aims to take its technology into several markets. There is the consumer point-of-use market (think of home systems that use carbon to purify water). The company plans to sell branded products through its e-commerce website.

In parallel with commercialization of the first generation of water treatment products, the company continues to invest heavily in research and development to improve the performance and value of its cyclodextrin adsorbents.

Cyclopure’s scientists have modified their cyclodextrin adsorbents to target specific contaminants. After targeting pharmaceuticals and pesticides with its technology, the company’s chemists designed a second adsorbent named, DEXSORB+ and will be used for municipal applications.

Today, its pilot scale production at the lab is producing 60 kilograms per month, enabling them to push out its commercial products, analytical and home activities. Next month in July, the company is launching its second home water test kit for pharmaceuticals and pesticides.

“Our turnkey resources and expertise have differentiated our materials in the field, and impressed our collaborators along the way,” said Frank Cassou, chief executive officer of Cyclopure.

Cyclopure is working with several partners in the U.S. and Europe both in drinking water and wastewater treatment projects. Notable municipal partners include Orange County Water District, Rahway Water (NJ), and Aqua America (PA) among others.

In total, Cyclopure has raised $10 million in funding, including a $3.5 million Series A round and Small Business Innovation Research grants from the National Science Foundation and National Institute of Environmental Health Sciences. The company was founded in 2016 by Cassou and Will Dichtel, a chemistry professor with Northwestern University.

Headquartered in Encinitas, the startup now employs 15 after recently adding five additional staffers to its team.

“If we can get people to trust in their tap again, with a cost effective solution, it’s a homerun for everybody,” Cassou said. “We are all trying to preserve water, be efficient in times where there’s growing populations. We want to bring a solution to the household that is healthy, affordable, sustainable.”