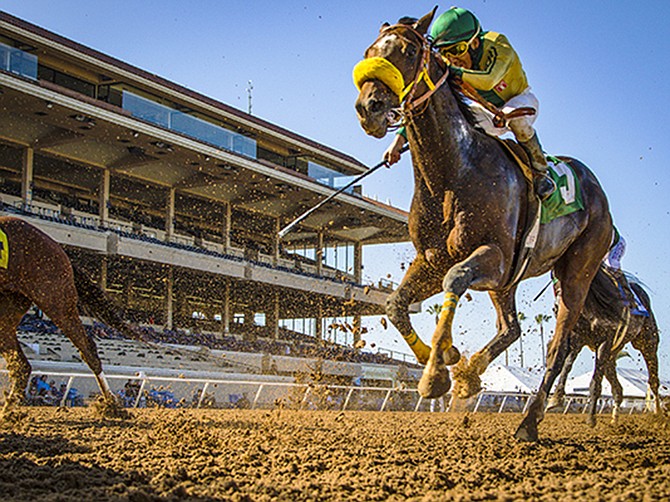 In May, almost a month after petitioning Gov. Gavin Newsom for emergency aid to help cover payroll and other bills, it was announced the state would allocate $40.3 million in funding to all of its fairgrounds.

The Del Mar Fairgrounds hosts the largest county fair in California and with its additional events has a $600 million annual economic impact. Tim Fennell, CEO of the 22nd District Agricultural Association, its operator, says it is expected to receive a significant chunk of the total amount of state aid.

“We are a state agency, but we are self-funded, so we don’t get a tax revenue or subsidy from the state. We are not part of the general fund,” said Fennell. “If we can’t do mass gatherings, we lose about 95% of our income. But we still have obligations to payroll, to our civil servants that are on payroll, and benefits have to be paid. And, so, we actively lobbied the governor and folks in Sacramento to be a part of the state fair network. Now, we are waiting to hear what that will be.”

In the meantime, while a timeline of financial aid distribution is worked out, Del Mar Fairgrounds leaders are not sitting on their hands.

Right after announcing the postponement of the “2020 San Diego County Fair” in April, and cancelling all future events till further notice, the powers that be began to pivot and focus on micro businesses to keep the lights on.

After receiving a call from Enterprise Holdings the car rental company based out of Orange back in March, the fairgrounds are being used to store approximately 4,000 cars, said Fennell. As people continue to be under lockdown due to COVID-19, car rentals are down. At 370 acres and having cancelled the bulk of its annual 300-plus events so far this year, the Del Mar Fairgrounds seemed like a good fit for them, according to Fennell.

Originally scheduled for 30-days, the $70,000/month contract has been extended through May and now June.

“That is producing some revenue,” said Fennell, adding that, recently, the Del Mar Fairgrounds was able to reopen the golf driving range and miniature golf attractions as well, as part of phase two of the state’s reopening plan.

Aside from being an interim parking lot, among other side hustles, the Del Mar Fairgrounds has also transformed parts of its operation during the lockdown to a drive-in and pick-up food and beverage business, said Fennell. On Fridays and Saturdays, because the County Fair isn’t taking place this year, the Fairgrounds is hosting food vendors from 12 p.m. to 6 p.m. as part of its “Taste of Fair” initiative, and that’s “helping out,” he said.

On site, those nostalgic can pick up funnel cakes and corn dogs, along with a variety of other fair staples, from the likes of Snax Shack, California Corn Dog Company, Roxy’s and Copper Kettle. The annual San Diego County Fair was set to have been held June 5 through July 5.

And, lastly, Fennell said, because there aren’t a lot of other sports currently taking place, a lot of fans are focusing on horse racing. As a result, the Surfside Race Place, the Del Mar Fairgrounds satellite off-track betting wagering facility, is seeing much more off-track betting than usual and the Del Mar Fairgrounds gets a percentage of that, he said.

The off-track betting segment might even see a boost from the upcoming summer race season.

At the end of May, the Del Mar Thoroughbred Club announced its plans to commence its 2020 season on July 10, pending the approval of the California Horse Racing Board. Originally scheduled to open on July 18, the track’s operators proposed moving the start date up to fit the races in despite an abbreviated schedule.

At almost 2 million attendees, the DMTC race meet is one of the biggest draws of the fairgrounds.

For now, the track would operate without spectators.

“We want to begin to meet earlier and offer horsemen the same number of opportunities to run as we have for the last several summer seasons,” said Tom Robbins, executive vice president of racing for DMTC. “We’ve had inquiries from new trainers from across the country who are interested in sending horses to Del Mar, which is encouraging. And because the San Diego Fair was cancelled this year, our track maintenance team will be preparing our racing surfaces earlier and we’ll be able to have horses on-site sooner than in the past. It will be a little different, but we’re confident we can present the same high caliber racing that fans, owners and trainers have come to expect.”

“We’re coming back and we’re going to put on the most unique show in Del Mar history,” added Joe Harper, DMCT’s CEO. “It’s going to look different, it’s going to feel different, but it’s going to be the first-class horse racing at Del Mar and in these unusual times, that’s something to look forward to.”

Horse races aside, a percentage of the $40.3 million would be tremendously helpful, said Fennell.

He said the Del Mar Fairgrounds normally pays about $1.6 million a month in payroll and health benefits to its employees. He also said, because of the county fair postponement, which draws almost 3 million people a year, and the cancellation of other events starting in mid-March, the gross revenue loss for the Fairgrounds is $57 million.

The Del Mar Fairgrounds would be lucky, he said, if it made even 25% of the $600 million in annual economic impact.

Still, Fennell is hopeful for the future.

By October, he’s confident “we will have this behind us,” he said, and can get back to “a relatively new normal.”

“I’m hoping by then, people can go to football games and sporting events and concerts and those types of things,” Fennell said. “I’m optimistic. I think we will see a positive movement in the next couple of months, to be honest.”

Encouraged by the next few months, Fennell perks up even more when he takes a further look ahead, into the upcoming year.

“I do think 2021 will be back to very close to normal or relatively close to normal,” he said. Not only will the fair have a very appropriate theme, “Heroes Unite!”, the Breeders’ Cup, the annual thoroughbred horse race, will also mark its return to Del Mar in 2021, said Fennell. It is scheduled to take place from Nov. 5-6.

In 2017, the Del Mar Fairgrounds hosted its first Breeders’ Cup World Championship, boosting the venue’s economic impact by $100 million to $700 million that year as a result.

And, with that, Fennell said, “I think we will have an outstanding year.”