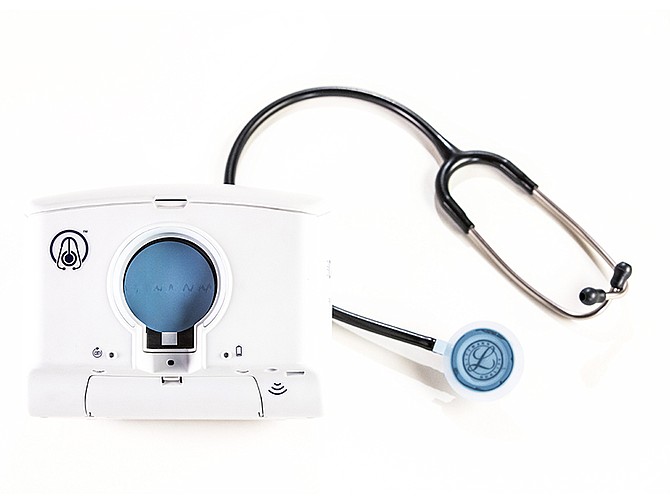 San Diego-based AseptiScope, a medical device company, is ready to hit the market as clinicians strive to reduce the spread of infections more than ever.

Founded in 2016 by a group of clinical experts and practicing physicians, AseptiScope’s mission is to develop and commercialize novel solutions that ensure infection protection for both clinicians and patients.

The stethoscope is one of the most prominent symbols of the interaction and bond between the physician and the patient. Best known as the clinician’s “third hand,” the tool is used during every physical examination as it can provide rapid diagnostic and prognostic information.

Due to COVID-19, the thorough assessment of patients with a stethoscope is critical, as is the need to maintain a pathogen-free stethoscope diaphragm surface.

As a result, AseptiScope is launching its flagship product, called The DiskCover System. Designed to allow healthcare providers to safely use their stethoscope, the device applies single-use aseptic stethoscope barriers in a touch-free fashion to the surface of the stethoscope diaphragm.

“We are incredibly proud of our DiskCover System because each single-use, touch-free, aseptic barrier blocks the transfer of pathogens from the stethoscope without affecting its acoustics,” said Dr. Alan Maisel, co-founder and Chief Clinical Officer of AseptiScope. “It also works in just a few seconds, presenting minimal impact on workflow in these hurried times. For both clinicians and patients, this innovation is truly a game changer.”

Historically, a clinician wipes the stethoscope diaphragm with alcohol, however that method is seldom employed and, even when it is, it fails to eliminate all the bacteria as some bacteria have built up resistance to alcohol and bacteria, in general, can tend to thrive in the crevices of the diaphragm. This repeated way of cleaning can also damage the stethoscope.

“We formed the company based on market analytics data, which showed that the stethoscope are used nearly 5.5 billion times a year, in the US alone,” said Scott Mader, founder, CEO, and President of AseptiScope. “There hasn’t been a good innovation in this area, it is a very exciting time to build value to patients, doctors and for stakeholders.”

Fine-tuning its product over the last two years, the startup’s patents were issued by the U.S. Patent and Trademark Office for its touch-free dispensing of barrier systems this year. “It was definitely a challenge,” said Mader. “We had to test and select from hundreds of materials in order to find one that provides a strong barrier to bacteria, is acoustically invisible, sensitive to skin, doesn’t leave a residue on the stethoscope and is anti-static so it doesn’t build up an electric charge when moving thorough the Clean Cassette”

Now, the company’s lead product is being assessed and vetted by both chronic and acute patient healthcare providers including a large hospital based in Los Angeles. The hospital name was not disclosed.

Dr. Stuart Kipper, a local internal medicine physician at Encinitas-based Stuart Kipper MD and Associates who has been using The DiskCover System, said he finds the product fast and easy to use.

“One of the first things I reach for when examining a patient is my stethoscope. Within seconds, it provides me a picture of what is going on inside their body,” said Kipper. “The touch-free DiskCover system protects my stethoscope and patients from all infectious agents. It’s fast and easy to use and my patients love it. There is no going back to the bare stethoscope for me.”

The company’s innovation was highlighted in a recent article in the American Journal of Medicine about the importance of the stethoscopes in the Covid-19 era.

Following its official launch in August this year, the company projects to hit $2 million revenue in 2020. Looking long-term, the startup expects revenue numbers will top $100 million within four years.

“We are comfortable and confident about hitting those numbers. The market is among the largest in the world and it takes too much time to clean between patients. We are providing a total solution for that,” said Mader. “Also, we have a team that is experienced in every dimension ranging from product development to clinical validation to market conditioning. We believe we can resolve this problem while bringing value to the market in a way that has not been done before.”

In 2018, the team raised a small amount of financing from friends and family. This year, the startup is seeking to close its $5 million series A round led by Brookline Capital Markets.

AseptiScope is headquartered in Mission Hills and currently employs 12 local staffers. Mader said the team plans to grow to 20 over the next 12 to 18 months.