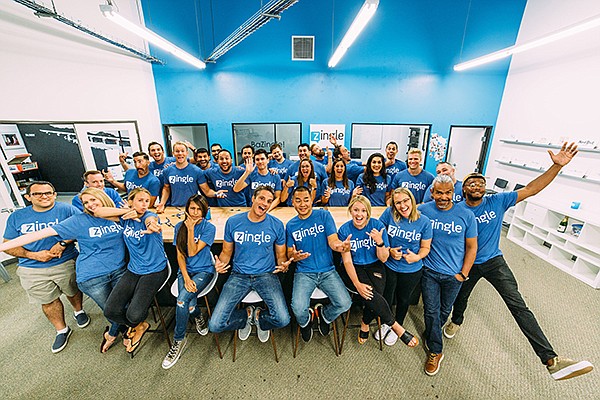 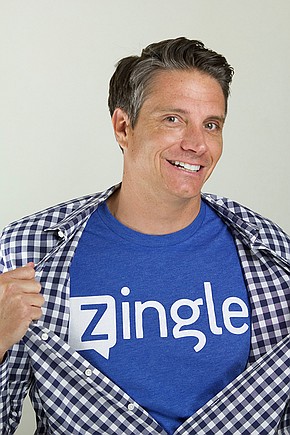 A long wait for coffee sparked the idea behind Ford Blakely’s business messaging company, Zingle. Blakely, who was working as CPA, was in line at a coffee shop in Del Mar. As he noticed the people standing around him constantly texting, friends, family and others, he had an idea:

“Why can’t I text a business?” Blakely said. “That’s what I wanted to solve.”

Now a 10-year-old company, Zingle has won over big brands in the hospitality sector, such as Hyatt and the Cosmopolitan in Las Vegas, and fitness companies Orangetheory and Weight Watchers. It has 43 employees in its Carlsbad headquarters, where it is bursting at the seams.

While most chatbots tend to deflect customers, Blakely said Zingle was designed to help hospitality companies engage more with their users.

“We built this through the lens of the best outcome for the end customer. That’s our North Star in terms of how we think,” he said.

Unlike your average business texting service or chatbot, Zingle can pull information from multiple sources, create maintenance or service tickets, and uses natural language processing to continually improve its understanding.

The company pulls in messages users send to a business through text, or a number of popular messaging apps including Facebook Messenger, WeChat and WhatsApp. Eric Pannese, Zingle’s senior vice president of product, said the company can pull in reservation data or information on a user’s loyalty status, to see if they might get free Wi-Fi, for example.

Through its acquisition of Presto AI in January, Zingle also gained the capability to better analyze messages. For instance, while a keyword-based chatbot might be able to spit out a hotel Wi-Fi password, it might give the same response if a user writes “my Wi-Fi is broken.” But Zingle’s service should recognize that message as a maintenance request.

“We have over 100 million messages we’ve gathered over the past few years,” Pannese said. “It creates a delightful customer experience, and it creates efficiency.”

The service also provides another important opportunity for companies in the hospitality industry: service recovery. In other words, if something went wrong with a guest’s stay, a hotel might have an opportunity to rectify that through a free late checkout or free drinks before the customers leave.

Zingle is currently going through a growth spurt, with $11 million in fresh financing through a round led by PeakSpan Capital. But 10 years ago, it was slow going, as companies had yet to take up messaging as a key part of their business.

“For me, because my background is in finance and accounting, I felt I had to solve the problem with my own money and resources,” Blakely said.

At the time that Blakely had figured out Zingle needed to be a software company focused on messaging, most companies wanted one thing: their own app. While he could have easily pivoted Zingle to become a company that builds mobile apps, Blakely stuck by his idea.

“For a number of years, I had a lot of headwinds,” he said. “Businesses wanted mobile apps because it sounded cool. But at the end of the day, it was a poor experience for the customer.”

Zingle had its first breakthrough in 2015, when Facebook decided that its messenger app should also connect to businesses. Zingle was named one of Facebook’s early partners.

“That was a very big mindset shift,” he said.

One year later, when Hyatt named Zingle its global messaging partner, “that was a lightning rod for us,” Blakely said.

Now, with a solid revenue stream and its recent funding, Blakely plans to channel Zingle’s resources to build out its natural language processing capabilities and hire more talent. The company is also eyeing a new headquarters location closer to the Pacific Surfliner in Carlsbad for workers commuting in from south San Diego County and Los Angeles.

“This financing has afforded us a resource to get really great people with domain expertise in this,” Blakely said. “At the core, it’s all about solving this customer experience problem.”