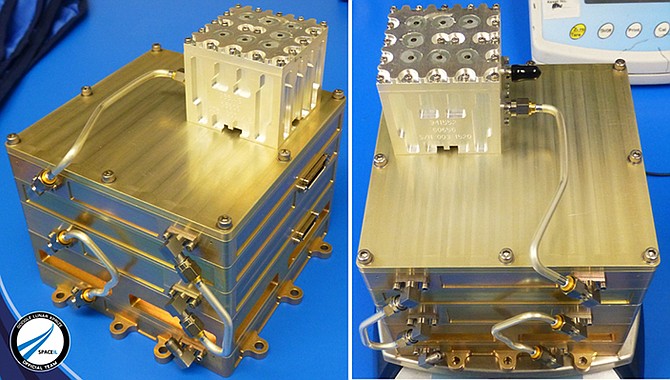 Space Micro supplied this software-defined radio transceiver to the Israeli nonprofit SpaceIL, which is sending a lander to the moon. Photo courtesy of Space Micro

Israel’s attempt to put a lander on the moon has a local tie.

Space Micro of Mira Mesa built communications electronics for the Israeli lander that blasted off from Florida aboard a SpaceX Falcon 9 rocket Feb. 21. And no, the technical issues the lander experienced in orbit had nothing to do with the San Diego content, said Space Micro CEO Dave Strobel.

The Israeli nonprofit called SpaceIL planned for a two-month journey to the moon. As of press time, the spacecraft was experiencing computer problems that were preventing it from boosting its orbit, according to published reports. It was unclear how the mission would proceed.

Space Micro built the spacecraft’s high data rate, S-band, software-defined radio transceiver. It is the only U.S.-made content on the lander, the CEO said. Space Micro built it under a $1 million contract — and ended up putting some investment of its own into the electronics, he said.

Space Micro electronics have been to the moon already as part of NASA’s Lunar Atmosphere and Dust Environment Explorer orbiter. The so-called LADEE mission ended with a planned crash landing on the lunar surface in 2014.