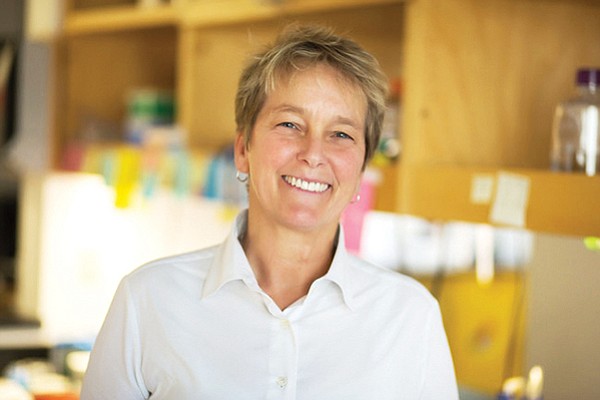 Laura Shawver — perhaps best known as the CEO of Synthorx — launched the Clearity Foundation after her own experience with ovarian cancer.

This month marks the 10-year anniversary of the foundation, which has grown in ambition and funding.

Through Clearity, ovarian cancer patients who have recurrent tumors obtain genomic information for deciding on a treatment path, like drugs that may be the most effective. The nonprofit provides tumor blueprints, interpretation, and clinical trial identification free of charge.

This comes after Shawver more than a decade ago learned firsthand that ovarian cancer treatment hadn’t changed in a long time.

The nonprofit began as a bootstrapped volunteer effort and transformed into a sophisticated operation under the leadership of Executive Director Hillary Theakston.

The next decade looks even more promising.

“This data we’ve gathered over time — tumor mutation data, outcomes data, clinical history — all of that helps us to be more knowledgeable and expert about ovarian cancer treatment,” said Theakston.

Gossamer is no average biotech. This summer it hauled in a $230 million Series B round, and it’s led by former Receptos executives. But it’s not exactly common to see a top pharmaceutical executive leave for an upstart.

During 13 years at Bristol-Myers Squibb, where she climbed the ladder, Salter-Cid advanced more than 20 compounds into clinical development.

Gossamer, which emerged in January, has three potential treatments in clinical trials and one in the research stage, with more to follow.

“The team and pipeline of innovative and transformative medicines that Gossamer Bio has assembled are truly exciting,” Salter-Cid said in a statement.

It’s no secret that electric scooters are all the rage. Riders can be found on the streets of downtown San Diego – and in emergency rooms. Dr. Michael Sise, a trauma surgeon and chief of staff at Scripps Mercy Hospital San Diego, recently gave several interviews about the dangers of the urban transportation trend.

“Injuries are coming in fast and furious,” Sise told the Washington Post in a Sept 6 piece, adding that his team saw four severe scooter injuries in the week before the article. “It’s just a matter of time before someone is killed. I’m absolutely certain of it.”