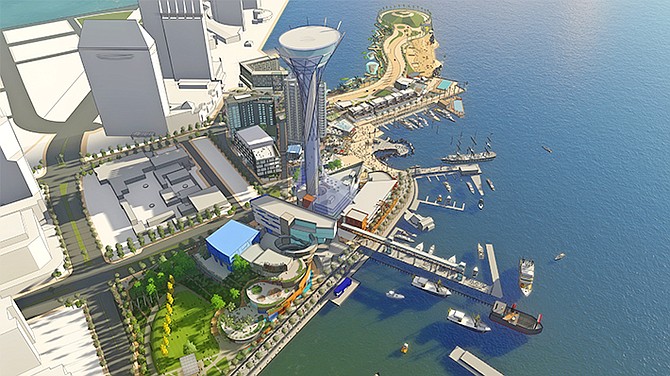 Rendering shows tentative plans for Seaport, the $1.2 billion redevelopment of a portion of the downtown San Diego waterfront that includes Seaport Village. Rendering courtesy of Gafcon 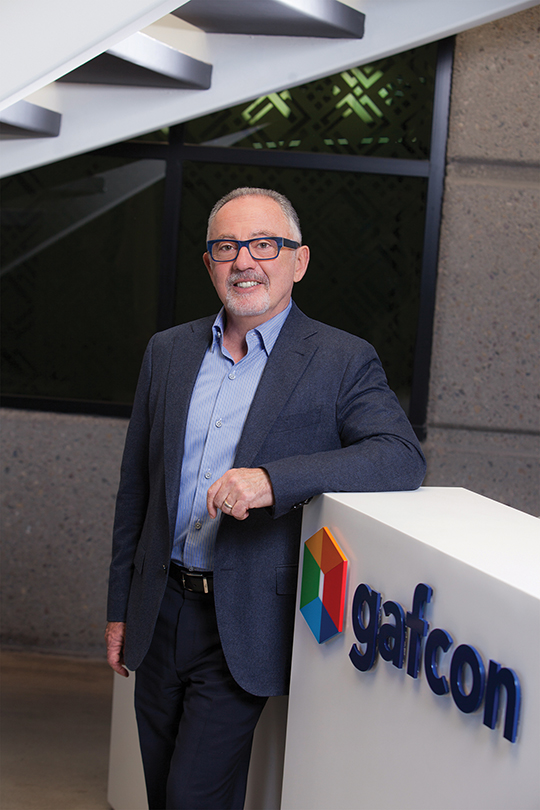 Quote: “I always knew I wanted to build things.”

When he hunts, he uses a bow and arrow instead of a gun.

When he fishes, he does a particularly difficult form of fly fishing.

As a younger man, he ran marathons.

Friends and business associates said that need to challenge himself is typical, illustrated perhaps in that Gaffen is involved in two major projects on opposite sides of the planet.

He and his partners in Protea Waterfront Development are developers of the $1.2 billon redevelopment of a 70-acre portion of San Diego’s waterfront that includes Seaport Village. His project management firm, Gafcon, also is overseeing the development of a sprawling waterfront site in China along the Huangpu River spanning five square miles. The project is estimated to cost more than $7 billion.

Gaffen sees the San Diego Seaport project as his legacy, and also the most complex project he’s ever undertaken, although it’s smaller than the development in Shanghai.

“I don’t think anything as big as this has been done in San Diego,” Gaffen said. “San Diego is on the verge of truly becoming one of the great cities of the world.”

Final plans for Seaport are expected to be unveiled in November with final architectural designs ready in early 2019.

Gaffen said he’s personally overseeing Seaport, as he calls it, while others in his company are working more directly on the Shanghai development.

“I’m involved, but not as hands-on as I am with Seaport,” he said.

The plans for Seaport call for a 500-foot tall waterfront tower, a 192,050 square-foot aquarium built in partnership with OdySea in association with the Scripps Institution of Oceanography.

Seaport would also include a marina, a learning center, an urban beach, hotels, a hostel, a public market, parks, plazas, a blue-tech incubator and a revitalized commercial fishing basin at the historic Tuna Harbor site. 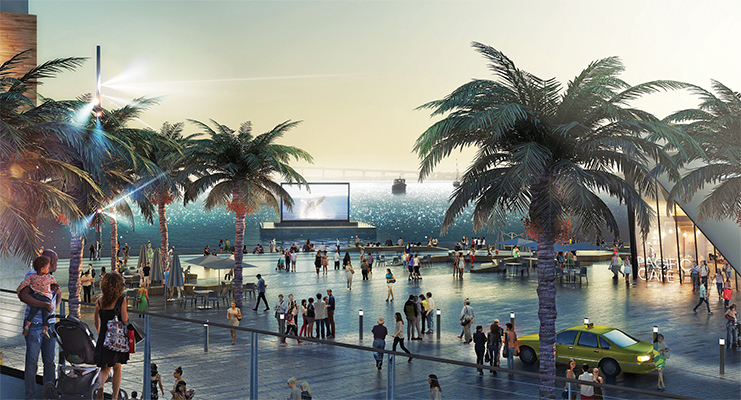 Rendering shows what the Seaport San Diego development might look like at the street level. Rendering courtesy of Gafcon 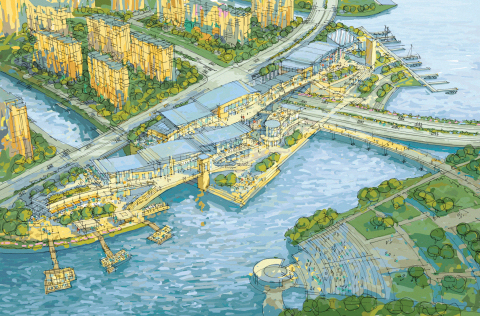 Gafcon is overseeing the vision and conceptual design of a master-planned waterfront community in Shanghai. Rendering Courtesy of Gafcon

It will include the 800-acre InnoTown, a business, technology and university hub, a marina and a walkable downtown center and is expected to take 10 years to complete.

“Waterfronts have always been a passion of mine,” Gaffen said.

It was the plan for Seaport that led to the selection of Gafcon Inc. to lead the master planning and development of a residential community in Shanghai, said Davy Liu, whose company is the primary developer.

“We’re overseeing the design of the project and the vision and the concept of the project,” Gaffen said. “Once we do that, they take over the execution.”

Liu said he’d heard of Gaffen through business associates and was impressed by a model of Seaport Gaffen presented at a real estate development exhibition in San Diego.

After working with Gaffen for more than two years on the Shanghai project, Liu said Gaffen “was more than we expected.”

“He assembled a professional team, including the architect, the designer and even some of the business operators,” Liu said. “Everything he promised, he delivered.”

A big difference between the Shanghai and the San Diego project is that everything moves faster in China, in part because the land is owned by the government and there are far fewer steps in permitting.

A native of South Africa, Gaffen was born in Johannesburg and grew up in Pretoria. He was conscripted into the South African Defense Forces in 1971, served in what became known as the South Africa Border war, and was discharged as a corporal.

As a teenager, Gaffen started his business career selling tropical fish with his life-long friend, David Schwartz, who is the founding director of Primewest Property Investors based in Australia.

“Both of us ended up getting fish tanks as gifts. The fish started breeding and we decided to make a business out of it,” Schwartz said. “The next thing we knew, we had 26 tanks in an old tool shed in my parents’ house.”

Gaffen “is still the same guy” he was back then, “still humble, still respectful,” said Schwartz, who has invested with Gaffen in Seaport and in a Chula Vista shopping center.

Rendering shows what the Seaport San Diego development might look like at the street level. Rendering courtesy of Gafcon

“He enjoys the challenge. The bigger the project and the more complex it is, the more he thrives on the challenge,” Schwartz said.

“With this style of fishing, most people are happy if they catch one fish because it is the most difficult form of fly fishing,” Eadie said. “One of the bigger difficulties he has, when we do get out on the river is he’s quite often fielding calls from all over.”

Bryan Benso, who worked for Gaffen for 13 years as a project manager and vice president of operations, said Gaffen is well-suited to handle two distant projects like Seaport and Shanghai at the same time.

“Gaf is strategic enough to ensure he has the right resources and the right team members to execute both projects,” said Benso, vice president of planning and real estate development for the San Manuel Band of Mission Indians.

“One of the biggest skills I think Gaf has, more so than anybody, is the ability to empathize with a client’s needs and figure out the best way to adapt and meet their goals and objectives,” Benso said.

Brigette Browning, president of the labor union Unite Local 30, said Gaffen has “gone out of his way to include the community” in Seaport.

“He’s very down to Earth, he’s like a working person,” Browning said. “Sometimes developers talk in real estate vocabulary, but he’s just like a regular guy who cares about people.”

In college, Gaffen started out studying civil engineering at the University of Cape Town but found it too distant from real projects. He earned a degree in construction engineering.

Driven by the political turmoil in South Africa, Gaffen and his wife-to-be, Pam, came to San Diego in 1979.

“It was before Mandela got out (of prison).There was significant upheaval politically — protests, a lot of repression. We just didn’t see it as a future for us to start raising a family,” Gaffen said.

His sister, Beverly Gaffen Altman, followed Gaffen to the U.S. in the early 1980s.

Gaffen worked for a time at Sunroad Enterprises.

“That’s kind of what really got me interested in development,” Gaffen said.

His first project in the U.S. was a Vista condominium development on Melrose Drive.

Gaffen broke away on his own in 1987 to form Gafcon with his wife.

“I remember my ex-boss telling me I’m going to fail but he’d take me back, not if I failed, but when I failed,” Gaffen said.

Family is a big deal to Gaffen, who credits his wife for much of his success.

“She’s pretty much been part of the business since we founded it up until three years ago and she retired,” Gaffen said. “I don’t think I could have accomplished what we’ve done without her help and the family business mentality, working together.”

His son, Josh, is vice president of development at Gafcon.

His mother was born in Latvia, his father in Lithuania.

They were able to obtain visas to South Africa, which was welcoming Jewish immigrants. His parents left their parents, grandparents and siblings, who were all murdered during the Holocaust.

A Window to the Past

In 1941, 830 Jews in his mother’s birthplace of Bauska, Latvia — home to much of Gaffen’s family — were marched into a forest and shot by Nazis and their collaborators.

In October 2017, Gaffen went to Bauska to dedicate the Memorial Synagogue Garden on the site of a destroyed synagogue as a celebration and commemoration to the Jewish community that once thrived there. Gaffen led the memorial project and worked on it for 15 years.

Photographs of his home and field where Bauska’s Jews were murdered are mounted as transparencies in the window panes.

Gaffen said the window gives a connection to his heritage, as does the African tribal art which is on display throughout Gafcon’s Sorrento Valley offices.

In addition to Gafcon, Gaffen is a founding partner of Protea Holdings, which he and Jeff Essakow started in 1994 to focus on buying and developing San Diego property.

The company owns and operates a number of high profile projects, including Flower Hill Mall in Del Mar and the La Jolla Corporate Center.

Looking back on his career, Gaffen said he vividly remembers standing at the waterfront in San Diego when he first arrived.

“I never, ever would have dreamed where I’m sitting today would ever be possible,” Gaffen said.