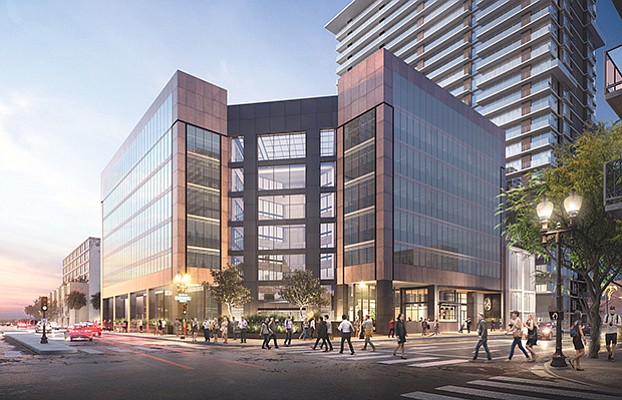 San Diego — A former U.S. Bank building on a prominent corner at the edge of Little Italy in downtown San Diego is about to undergo a dramatic transformation.

Built in 1984, the vacant 123,062 square-foot seven-story building at 1420 Kettner Blvd., will be gutted and resurrected as what the developers — DivcoWest and Ocean West — described as a “boutique office environment.”

“The infrastructure will be there. The façade will be there, but the entire interior of the building will be demolished. That way, we’ll start with a clean slate for every floor,” said Derek Hulse, managing director in the San Diego offices of Cushman & Wakefield, a commercial real estate brokerage.

Gensler is the architect on the project and Reno Construction is the general contractor, with a target of finishing construction by the second quarter of 2019. Hulse and Philip Roberts, a director of Cushman & Wakefield in San Diego, are the leasing agents.

Hulse declined to say how much DivcoWest and Ocean West are spending on the project, but he said the former bank was “a forgotten asset” because it was occupied by U.S. Bank from the day it was built.

“Little Italy is arguably San Diego’s most dynamic and flourishing neighborhood. It has become the go-to destination for the best dining in the city and it has incredible housing opportunities that command some of the highest rents in the county,” Hulse said. “Companies are seeking locations specifically in Little Italy, but unfortunately, there are very limited opportunities.”

Renovations to the former bank building will include a new café/restaurant, a third-floor common area balcony, a tenant lounge, resort-style locker rooms, and a private ground floor tenant patio.

The third floor balcony will be completely redone, with indoor seating, a kitchen area, and an entertainment area.

“We’re adding meeting areas outdoors and places you can go and sit and relax,” Hulse said. “The general appeal is the high quality aesthetic, large open floor plates, access to multiple modes of transportation, including San Diego International Airport, proximity to the waterfront and an amenity base, which includes dozens of dining options within a few blocks that only Little Italy can provide.”

Pat Buchanan, a consultant to DivcoWest, said the renovations are meant to get away from the “corporate office” feel the building had with U.S. Bank.

To do that, the extensive lobby renovations will incorporate “kind of a casual tailoring of different finishes,” including charred wood and bronze detailing.

“I’d call it kind of casually elegant,” Buchanan said. The renovated space would be ideal for a tech-based company, startups or “smaller independent firms.”

Hulse said he’s gotten inquiries from a diverse group of prospective tenants, “from the tech, design and media industries to more traditional industries, such as law and finance.”

Buchanan said DivcoWest is looking at “a couple of other buildings” in San Diego but declined to give specifics.

“We try to focus on urban areas that are technology-focused, so we see some opportunities in San Diego,” Buchanan said.

Renovation of the former U.S. Bank building at the south end of Little Italy is but one of several planned or ongoing projects in the neighborhood.

At the other end, Los-Angeles based Kilroy Realty has applied to Civic San Diego for approval for construction of a 90-foot tall, mixed-use building at Kettner Boulevard and West Hawthorn Street.

Civic San Diego is a nonprofit owned by the city which oversees downtown development.

The five-story building would include 178,800 square feet of commercial office space, 13,000 square feet of ground floor retail space, and 280 parking spaces, according to the permit application.

Taking up a full block bounded by West Ivy and Hawthorn streets, Kettner Boulevard and the MTS trolley tracks, the Kilroy project will replace old warehouses.

This story has been updated to correct the square footage of the building.