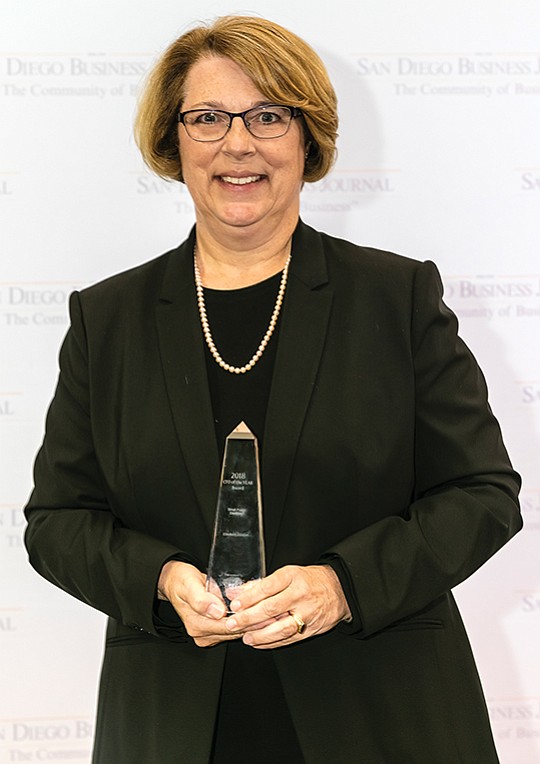 Elizabeth Hougen in 2017 led the IPO of an Ionis Pharmaceuticals Inc. subsidiary. which raised about $190 million. Photo by Bob Thompson/Fotowerks

San Diego — The generally small rate of pharmaceuticals that ultimately make it to market means it can be pretty dismal working for a drug discovery and development company.

Knowing this, Elizabeth Hougen makes an extra effort to stay optimistic and spread her positive outlook around the offices where she works at Carlsbad-based Ionis Pharmaceuticals Inc.

She gets letters from patients and invites them to address Ionis employees and speak at community events. She gains strength from these people, whose lives are affected by the company’s use of a proprietary drug discovery process called antisense.

“It’s those kinds of interactions that remind me why I do what I do every day,” she said.

Ionis, where she has worked for 17 years, focuses on discovering and developing drugs for patients with the highest unmet medical need. The company has 442 employees and more than 40 drugs in development.

At Ionis Hougen has learned it pays to raise money when she can. It typically takes 10 years to bring a drug to market, and windows to financing can open and close during that time.

“I heard a San Diego biotech CEO say years ago, ‘The most expensive financing is the one we didn’t do,’ ”” she said. “And I think there’s real truth to that.”

Hougen has helped raise $3 billion for the company and in 2017 led an IPO for a company subsidiary, which raised $190 million. Her job is complicated by the diverse stages of business, from R&D to launching commercial products and various revenue streams, royalties and milestone payments among their 10 partnerships with Pharma giants.

Then there’s just being smart about money. Hougen recounted the time in 2010 when the company decided it wanted to build what is now its corporate headquarters. Ionis wasn’t in a financial position then to buy the building, so it entered a lease with a prominent biotech lender.

Hougen hadn’t done much work in real estate finance previously. But when the lease’s fixed-price purchase option opened in July, she made sure to be ready.

She hired real estate consultants who assessed the building. They assured her the building was worth more than the option price. So she sought interest from mortgage bankers.

When the option opened during the summer, Ionis went ahead with the purchase – and the mortgage ended up saving the company several millions of dollars per year.

If little successes like that don’t keep her going, there’s always the big picture.

“When you see a baby who shouldn’t be alive peddling a bicycle, you realize what you’re doing isn’t that difficult,” she said, “and you get down to work.”