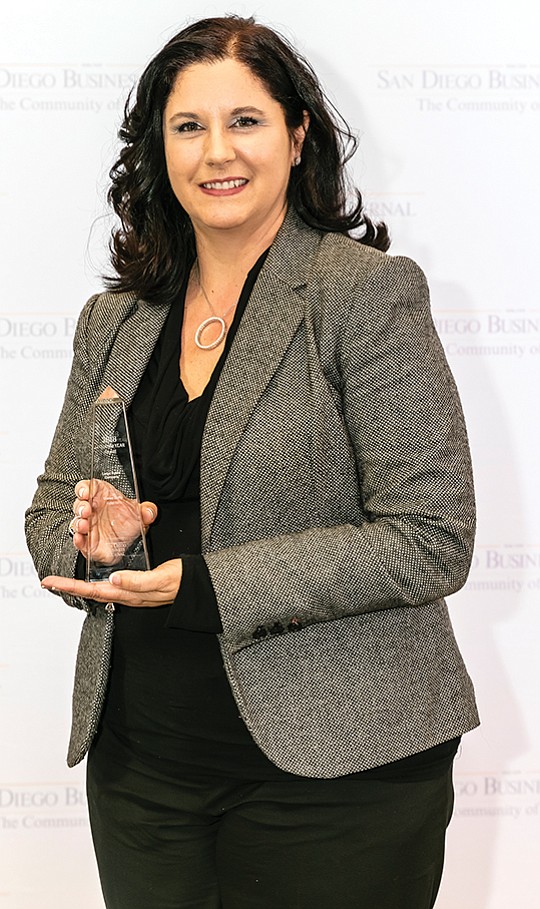 San Diego — Probably every CFO gets something of a kick out of balancing profitability with industry-changing investments. But ViaSat Inc.’s Shawn Duffy gets a little more pumped up than most.

Duffy finds it really rewarding when she’s able to align business activities and investments with the Carlsbad-based global telecommunications and Internet company’s long-term strategy and internal-rate-of-return targets. It takes insight, deep understanding of the business and ongoing analysis.

“Plus,” she wrote in an email, “for ViaSat, our core business also includes strapping our $500 million investment onto a rocket and sending it off into space – which definitely keeps things exciting around here!”

Duffy is winner of the San Diego Business Journal’s 2017 CFO of the Year for a large public company.

ViaSat does have unique challenges and risk. With 3,500 employees – 2,000 of them in San Diego County – it operates in government, enterprise and consumer sectors. Its research and development budget is immense. And it is a publicly traded company, which presents its own sets of challenges with investor expectations.

The broad international experience she brought to the company 12 years ago (she’s served as chief financial officer for three) proved valuable when she helped launch services in Mexico and Europe in 2017. She went in knowing every region has its own opportunities and challenges.

In the European Union, she learned how the laws of each member state differ and how each country’s population and socio-economic landscape helped determine demand for broadband service.

“Now compare that to our work in emerging markets like Mexico or South America,” she wrote. “It  becomes pretty clear: a cookie-cutter, one-size-fits-all approach to market entry/service launch does not exist.”

ViaSat is known for its internet service on airplanes and its advanced satellite communications for the military. It recently launched its satellite-based home internet service across the United States. The ViaSat 2 satellite system, launched in 2017, powers the new service. It’s now developing ViaSat 3, a trio of high-capacity satellites.

Among the biggest events Duffy was involved with in 2017 was a large bond offering. Markets were in good shape when the process started, but then they started to shift. That raised concerns prices would tighten.

“We had to make a call,” she recalled. “Should we move forward or not?”

ViaSat had an opportunity to seize, so it moved forward. But the offering still required favorable terms, so company executives reached out to educate investors on ViaSat’s business and long-term growth strategy.

It worked. The company ended up over-subscribed. On Sept. 7, ViaSat announced the $600 million bond sale would instead reach $700 million.

“We saw strong interest spread across new and existing investors,” Duffy noted. “We upsized our offering ... secured lower pricing and capitalized on added flexibility for our international growth – a true win-win-win story all around.”

Duffy also serves on the advisory board of the College of Business Administration at Cal State University San Marcos and supports STEM education through Athena San Diego, Biocom’s Festival of Science and Engineering and other organizations.