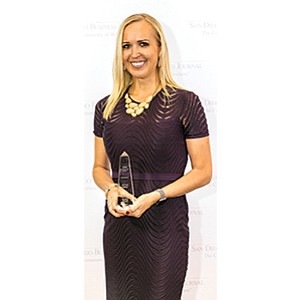 San Diego — What a year 2017 was for Ashlee Micale, CFO and executive vice president at San Diego County Credit Union.

On paper it was a big year for the 80-year-old credit union. Membership grew by more than 10 percent to 374,218, and at the same time its total assets increased 5 percent to $8.3 billion, all while maintaining twice the industry standard for capitalization.

Less evident to outsiders is that, behind the scenes, Micale was leading a series of initiatives and planning processes to guide the institution to success in key areas not only in the current fiscal year but for years to come. Her mantra for SDCCU is “Do things smarter, not harder.”

Her achievements make Micale a 2017 San Diego Business Journal CFO of the Year.

Micale joined the credit union in 2012, and has worked as a CFO for 20 years. Her involvement with several committees of the Credit Union National Association speak to high professional standing.

Among her most recent initiatives at the 856-employee credit union is a data visualization project intended to help with trouble-shooting and internal decision-making. By making large amounts of information easier to consume, different departments are able to spot new efficiencies and potential service improvements.

Micale was responsible, as well, for the creation of a roadmap that is expected to chart a course for the credit union for the next three years as it anticipates growing to $10 billion in assets. Her team worked with an outside consultancy to prepare for additional compliance and other requirements on the horizon.

While also heading up accounting, finance and accounting, she developed and put in place new enterprise risk management measures. The goal is to identify, assess and respond to risk the credit union faces.

On top of everything else, Micale recently developed a new investment strategy for San Diego County Credit Union. Among other things, the plan has led the credit union to invest more than $1 billion in loan syndication, a move that by itself produced $39 million in revenue in 2017.

“We are incredibly proud of Ashlee for this well-deserved honor,” the credit union’s president and CEO, Teresa Halleck, wrote in an email. “She is one of the brightest CFOs in our industry and her highly effective leadership and strategic abilities have greatly contributed to the success of SDCCU over the past nearly six years.”