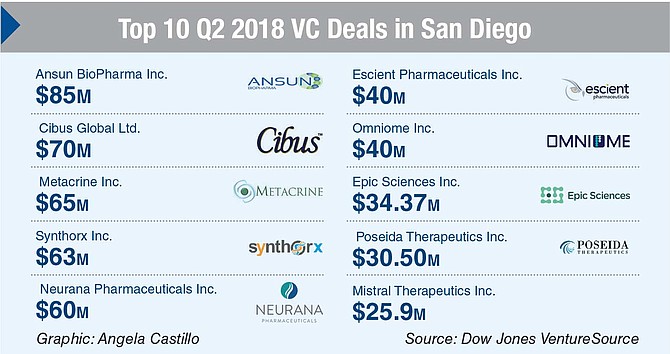 San Diego — Early-stage companies in San Diego had a successful second quarter for fundraising, taking in more or nearly more investment dollars than local companies have ever before, depending on the data source.

According to Dow Jones VentureSource, more venture capital dollars were invested in San Diego-based companies in the second quarter of 2018 than any other quarter in history except the fourth quarter of 2014.

VentureSource identified 29 deals and $705.08 million invested. Investors put 78 percent more money into companies than in the same quarter a year prior, while 15 percent fewer deals were struck.

Nationwide, VentureSource reported the amount of venture capital invested was $27.08 billion, 27 percent above a year ago when $21.31 billion was invested in U.S. companies. The report tracked 1,426 rounds in the second quarter, 2 percent more than the same quarter of 2017, when it found 1,395.

“Looking at the halfway point, the market’s down on deals but way up on cash deployed, which follows the trend we’ve seen of more dollars in fewer companies,” said EY’s Jeff Grabow, who leads the professional services firm’s U.S. venture practice.

The San Diego region’s second-quarter haul wasn’t impacted by any so-called mega-rounds, as those that top $100 million are called.

“My initial reaction when I got the data was to flip through the pages and find the one big deal,” Grabow said. “Well, there wasn’t one: It was very evenly distributed across the sector.”

The largest deal in San Diego in the second quarter was $85 million, Ansun BioPharma Inc.’s fifth venture round, according to VentureSource.

Of the top 10 deals VentureSource tracked in the second quarter, half were later stage rounds. Four were Series A; one, Series B. Except the $70 million Series C round raised by Cibus Global Ltd., an agtech company in Sorrento Valley, the top 10 rounds all went to health care companies. The median amount invested in San Diego-based health companies that raised money in the second quarter was $34.37 million, 72 percent more than a year ago, according to VentureSource data. Overall the median amount of deals in the region was $15 million, 46 percent higher than a year ago.

Grabow noted that the success health care companies have been finding in the public markets bodes well for San Diego’s ecosystem.

So far in 2018, companies in San Diego have raised more than $1.06 billion — more than was raised in the region in all of 2013, VentureSource data show.

“There’s just over $1 billion deployed in two quarters, and last year there was $1.5 billion on the year, and the year before that it was $1.3 billion, so things are looking very strong so far,” Grabow said.

Broadly speaking, entrepreneurs are in a good position, he said, citing the declining cost of starting a company and record levels of venture capital fundraising. VentureSource reported VC fundraising in the second quarter was the highest it has been in the past three years both in the amount invested and the number of funds. The report said 159 funds collected $17.74 billion nationwide during the quarter, doubling the amount raised in the first quarter of the year.

The number of funds was up 9 percent. However, one fund, Sequoia Capital Global Growth Fund III IP, which raised $6 billion, accounted for 34 percent of the total VC financing raised during the second quarter.

The PricewaterhouseCooper and CB Insights MoneyTree report identified more deals but a lesser amount of investment in San Diego in the second quarter compared with a year ago — 34 deals for a total of $590.4 million. The total invested was more than PwC has ever tracked in a single quarter in San Diego. The number of deals fell short of the 40 investments that PwC recorded in the first quarter of 2014.

PwC tracked more than 30 mega-rounds nationwide in the quarter for the third quarter in a row. However, as a percentage of total VC funding, mega-rounds shrunk to 34 percent. It was the second consecutive quarter the percentage fell, the report said.

Overall the report tracked the second straight quarter of increased deals and dollars, with $23 billion invested across 1,416 deals, with internet companies leading the way. That sector took in $8.9 billion in 610 investments, followed by the health care industry, which saw $5.3 billion invested across 216 rounds. The mobile and telecommunications and software sectors received $3.4 billion and $1.8 billion, respectively. Rounding out the top five sectors was the consumer products and services industry, with 64 rounds totaling $400 million, the MoneyTree report said.