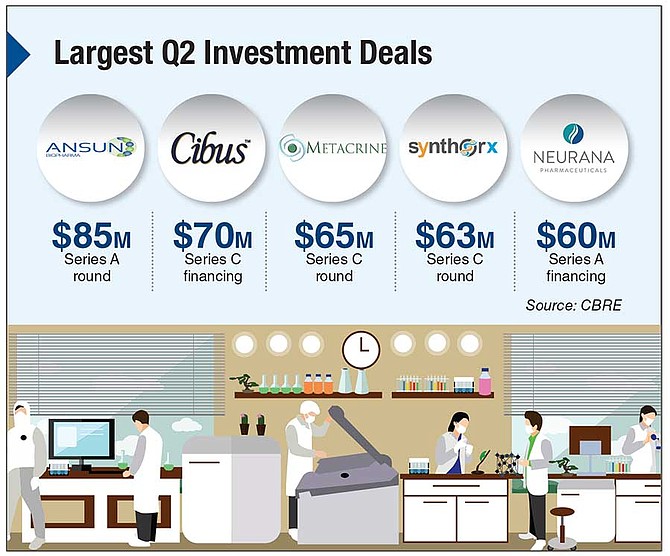 Investment in San Diego-based life sciences companies hit a record high $427.5 million in the second quarter of 2018, according to a July CBRE Group Inc. report. This figure beat the preceding quarter’s $417.9 million in investment, which was a record at the time, and represents a 32 percent year-over-year jump.

It’s tough to read too much into one quarter, but investors have taken notice of all the innovation coming out of San Diego. And the favorable macroeconomic environment helps. So said Michael Combs, research manager with CBRE.

“San Diego companies have a history and track record of being good investments from a venture capital standpoint,” said Combs.

Of the 10 life sciences deals this quarter, the largest was Ansun BioPharma’s $85 million Series A round. The company is developing anti-viral therapeutics for respiratory tract infections. Proceeds will go toward a final-stage clinical trial for its medicine DAS181.

The drug looks to be on a favorable regulatory track, since the U.S. Food and Drug Administration has granted both fast track status and a breakthrough therapy designation.

Rounding out the top three was Metacrine. The company, which is working on drugs for liver, metabolic and gastrointestinal diseases, closed a $65 million Series C round. Metacrine’s lead candidate, MET409, targets a receptor linked to non-alcoholic steatohepatitis, or NASH, a debilitating condition for which no approved therapies exist today.

“It’s been a couple of quarters so I definitely don’t know if we’re in trend territory yet,” Combs said of regional life sciences investment. “But it always has a lot to do with intellectual property, talent out there and developing those ideas.”