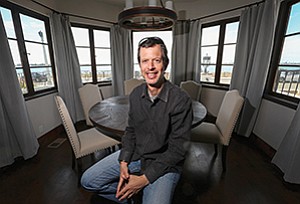 Pacific Beach resident Dean Rosenberg will lead the San Diego chapter of Tech Coast Angels. “My overarching goal is for TCA to be the best place for the best companies and teams to raise their seed financing,” he said. Photo by Jamie Scott Lytle.

San Diego — The San Diego chapter of Tech Coast Angels, one of the largest networks of angel investors nationwide, is headed into 2018 with a new leader at its helm.

The nonprofit organization, members of which have invested more than $170 million in more than 300 companies, has five regional networks throughout Southern California.

Rosenberg shared a bit with the San Diego Business Journal about his history as an entrepreneur, an investor and his plans for the San Diego chapter going into the New Year.

Q: Before you were part of TCA, you were yourself a founder, and even pitched the group for funding. Tell us about your history as an entrepreneur.

A: I have been doing the “startup thing” since the late ’80s. I started a software consulting company while an undergraduate at UC San Diego. I launched a number of startups out of the consulting company over the years, some more successful than others. In the late ’90s I was the co-founding chief technology officer of SupplyPro, where we raised over $28 million in venture capital. SupplyPro was an interesting story because it started out as a project by my classmates while we were in the Executive MBA program at San Diego State University. I sold my last company, Airsis Inc., to a public company in 2014 after we achieved some growth with a software product in the maritime and energy industry.

We raised $2 million in angel investment from TCA for Airsis to develop and launch that product, which is where I initially got introduced to the group.

Q: When did you join TCA, and what prompted you to do so?

A: I joined TCA shortly after I sold my company in 2014. I wanted to continue to exercise my entrepreneurship skills to help others, while also taking a break from the trenches of being an active founder/CEO. I was motivated by how dedicated many in TCA were to supporting our local ecosystem with both their time and money.

Q: Tell us about some of TCA’s recent successes. What are the most exciting early-stage companies in San Diego the group has backed?

A: TCA has funded over 300 companies and has about 70 exits today. There are the big ones that have been talked about before, like Sandpiper Networks and Green Dot, both (of) which achieved over 100x returns for investors. There was also Savara Pharmaceuticals, which recently went public. We also have some exciting recent investment stories like Echo, an innovative microscope company, for which TCA led a $2 million seed investment last year then, six months later, co-led a $7.5 million Series A financing.

Q: Early-stage investment is competitive. How is TCA positioning itself to remain of interest to entrepreneurs, and how does the organization stay informed about startups with potential?

A: There are not many places for an entrepreneur to raise seed funding of $300,000 to $1 million, and that is our sweet spot. We are trying to work with entrepreneurs to make the process as painless as possible. We are streamlining our process and implementing technology to help better connect entrepreneurs to our investor members. As for staying informed, we are very active both in the local region and nationally. We do local outreach events and also participate in the Angel Syndication Network, which has dozens of other participating angel groups around the country to help fill seed financing rounds. We also foster close relationships with VC firms and family offices in Southern California where we share visibility to promising companies.

Q: What are your goals as president of TCA, and what impact, quantitative and qualitative, do you hope to have on the organization?

A: My overarching goal is for TCA to be the best place for the best companies and teams to raise their seed financing. We have done a lot in the last several years towards that goal, and we also have plenty more to do. While raising money from an angel group is a process, we are trying to get to both “yes” and to “no” much more quickly so that entrepreneurs are not burdened by a protracted funding process.

We are exploring options for incorporating crowdfunding platforms like AngelList into our process. And I have a personal goal to work with our board to double our investor members by the end of my term.

Having more engaged investors means more funding for companies and more long-term benefits to the economic growth and well-being of San Diego and our broader region.