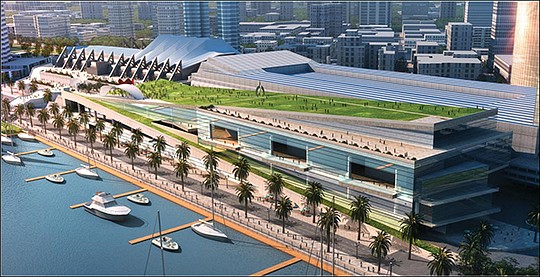 A plan to expand the downtown convention center failed to make the November 2018 ballot but could go to voters in 2020. Rendering courtesy of the Port of San Diego

A drive to expand the San Diego Convention Center sputtered when it was ruled that a count of eligible voters came up short, thus, failing to get a financing plan to pay for an expansion on the November ballot.

A random count by the San Diego County Registrar of Voters came up short of the more than 71,600 signatures of registered voters needed on petitions to put the measure before voters this year. A final count showed there were enough signatures, but the count was finished too late to make the November ballot.

The issue is set to go on the 2020 ballot, but Mayor Kevin Faulconer has been pushing for a special election in 2019 to put the expansion before voters.

At issue is a financing plan for the $685 million that would raise the 12.5 percent hotel tax by a range of 1.25 percent to 3.25 percent, with the rate highest for hotels closest to the convention center and lower for those farther away.

Proponents said the expansion is needed if San Diego is to compete with other cities for large conventions. The proposed expansion would have increased overall convention center space about 33 percent.

A 2017 study estimated that an expanded center would allow the city to attract about 50 more events and increase hotel room revenue by about $123 million annually.