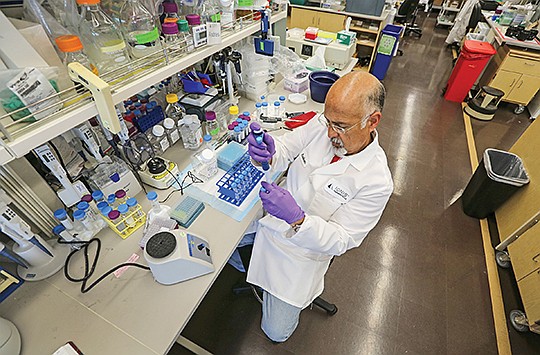 Research assistant Andres Berdeja at one of Ionis’ labs in Carlsbad. Ionis pioneered antisense drugs that bind to RNA instead of proteins, which have been the focus of the pharmaceutical industry for more than 100 years. Photo by Jamie Scott Lytle.

Every month in 2018 seemed to bring a major development at Ionis Pharmaceuticals, from a $1 billion deal to hope in Huntington’s disease.

Not everything was positive. In August, the U.S. Food and Drug Administration declined to approve Ionis’ drug candidate waylivra, reportedly due to safety concerns. But waylivra could still hit the market as Ionis vowed to work with the FDA on a path forward.

Another Ionis drug, tegsedi, in October gained regulatory approval, pitting the company against a treatment from Alnylam Pharmaceuticals.

They’re targeting hereditary ATTR amyloidosis with polyneuropathy, in which abnormal protein buildup can be life threatening.

In March, Ionis reported that in a phase 1/2 trial its drug, Ionis-HTTRx, reduced the levels of a mutant protein found in Huntington’s disease patients. The goal is to stop or slow the disease’s progression.

A month later, it was announced Biogen will pay Ionis $1 billion as part of a 10-year collaboration around neurological drug development. The deal expanded the companies’ partnership, as Biogen commercialized Ionis’ blockbuster drug spinraza for spinal muscular atrophy.