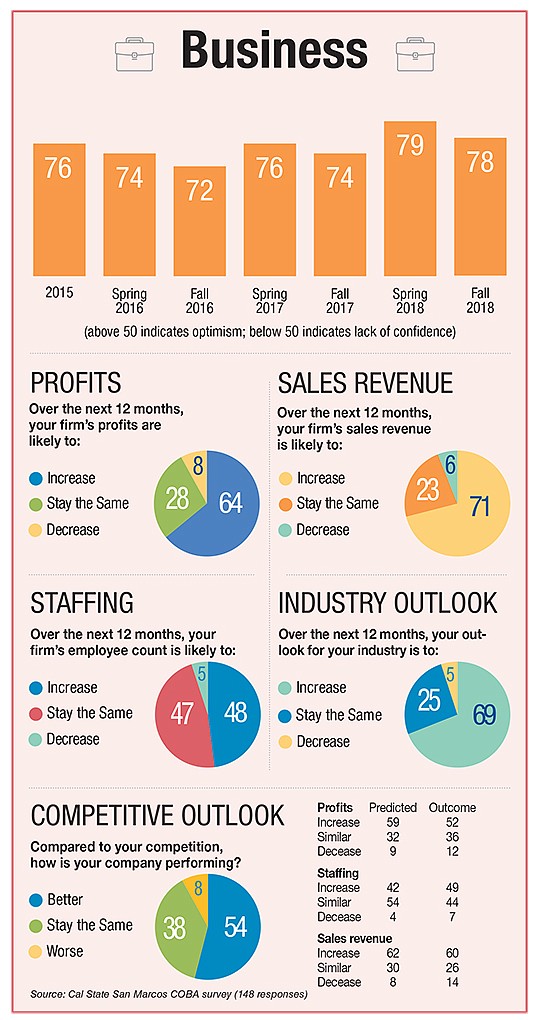 Although big beer has been lurking around the craft beer neighborhood lately, it seems the latter isn’t too worried about the presence of the former just yet.

Similarly, although topics that can affect local tourism were tossed around this year, like stiffer regulations on short-term rentals, that sector isn’t too nervous about a decline any time soon.

And, to hear insiders say it, business in San Diego overall seems to be pretty steadily on the up-and-up.

All this according to the findings in the latest San Diego craft brewers, tourism industry and business confidence indices developed by the Cal State University San Marcos College of Business Administration and the San Diego Business Journal.

“The results are positive, from the craft brewery standpoint, tourism and the overall business industry,” said Joe Terzi, president and CEO of the San Diego Tourism Authority. “Most people said things would get better and very few pointed towards negative trends. I don’t see anything on the report (indicating) things won’t get better or stay the same.” 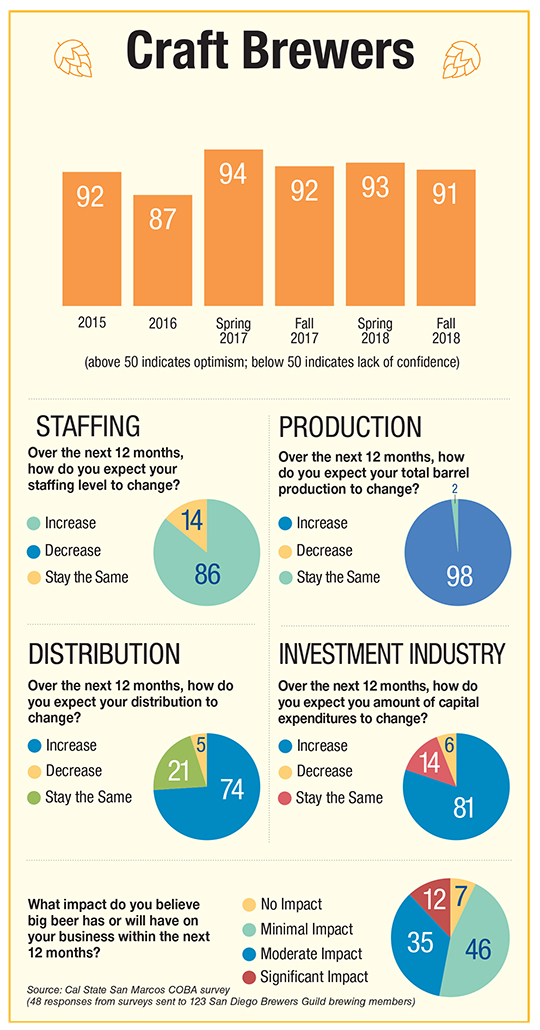 Some highlights from the surveys:

Overall, the fall 2018 Business Confidence Index had a score of 78, just one point down from the spring index, but higher than any report since fall 2015. When asked, over the next 12 months, whether the companies of those surveyed would profit, 64 percent of respondents said the number would increase, while 28 percent said it would remain the same and 8 percent said it would decrease.

As for their outlook for the industry over the next 12 months, 69 percent of

The Craft Beer Confidence Index scored an overall grade of 91 for the fall, which is less than spring’s 93 score but more than what it was in 2016.

“The main concern of craft breweries is will it impact my ability to get on shelves or to get a tap handle at a restaurant or pub,” said Todd Colburn, secretary at the San Diego Brewers Guild, craft brewing industry advisor at Cal State University San Marcos and founder of Higher Gravity Brand Advocates, a San Diego-based consulting firm. “That is a valid concern because there are a limited number of shelf spaces and tap handles. But, for the most part, I think the sentiment among craft breweries is everyone is in it together. They don’t look at each other as competitors, outside of friendly competition, in the fight to get consumers to try craft beer.”

Carl Winston, director of the L. Robert Payne School of Hospitality & Tourism Management at San Diego State University, says another concern for the local craft beer industry is the distribution dollars that the big boys have.

“The main boogey man for the small beer producers is distribution,” said Winston. “The big guys have trucks and national accounts and higher distribution costs because of it. If you are a small one, your distribution is low because you aren’t selling so much of it. But, distribution costs are disproportionately large for small guys; that is why they have these tasting rooms. That allows them to sell more beer for no distribution cost.”

In terms of tourism, a whopping 95 percent of respondents said the outlook of the tourism industry in San Diego County looks positive.

Overall, the study showed numbers have remained very similar to what they were a year ago. And, looking ahead, that businesses remain confident in what’s to come for next year.