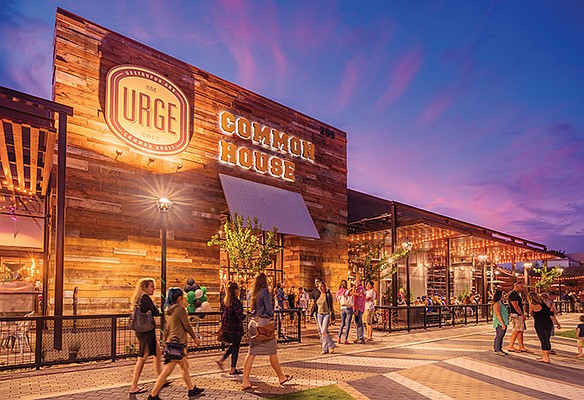 A former industrial building in North City has been converted into a craft beer brewery, tasting house and restaurant that includes a bowling alley and outdoor recreation space. Photo courtesy of Sea Breeze Properties

Gary Levitt darted from building to building, weaving his way amid the scaffolding that frames an apartment building that’s still under construction as he talked grandly of what’s still to come on the San Marcos project that he’s been working on for the past 15 years. 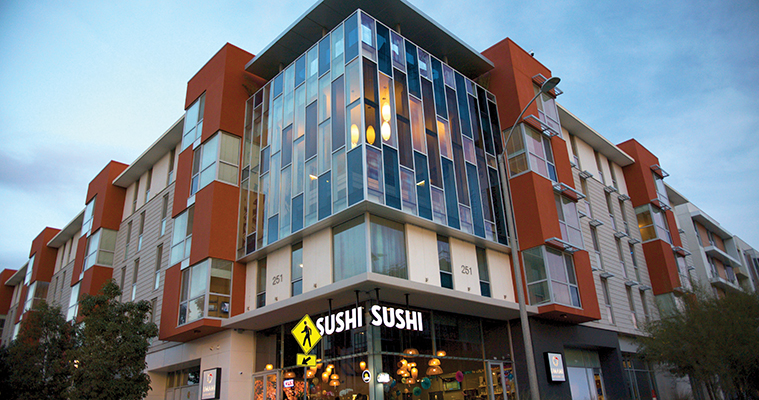 Block C is a mixed-use project in North City with apartments and commercial space. Photo courtesy of Sea Breeze Properties

“If you drive along the 78 freeway, there aren’t a lot of places you want to get off and visit,” Levitt said. “We built one for you.”

The place Levitt is building is North City, a $2 billion project billed as the new downtown for San Marcos adjacent to the CSU San Marcos campus.

In a similar but considerably smaller project, Levitt’s Sea Breeze Properties based in Carmel Valley in 2013 acquired the 42-acre site of what was to have been a big box shopping center in Rancho Penasquitos/Torrey Highlands.

In its place, Levitt plans to build a $350 million mixed-use project which he named Merge 56 that will include 500,000 square feet of commercial space, a movie theater and 242 residences that would be a mix of detached homes, condominiums and apartments.

The company also has developed several other retail, office and housing projects in San Diego County.

The project reached a milestone of sorts in November with the topping off of an $81.9 million extended learning center that Levitt is building in a joint venture with CSU San Marcos across the street from the university’s main campus.

At 150,000 square feet, the extended learning center will be the biggest building at the university, said Karen Haynes, president of CSU San Marcos. The learning center includes a 700-space parking garage.

With completion targeted for August 2019, the center will be linked to the main campus by a pedestrian bridge across Campus Way.

Calling the center “a significant addition to the campus,” Haynes said it is being built in a “public-private partnership unique within the state of California.”

The university will own the top five floors for classrooms, labs and offices.

Leavitt’s North City will own the bottom floor, which will be used for retail.

The Urge Gastropub & Common House is in a former spa manufacturing plant which was gutted and renovated.

“We’re finally getting to the point where we’re getting some momentum on the tenant side,” Levitt said. “It’s a slow process and it has been a hard sell to convince tenants of our vision.”

“It’s all about creating a city and what you have in a city is a little bit of everything,” Levitt said. “We’re turning it into the center of North County inland.”

Despite its connections to CSU San Marcos, Levitt emphasized that North City is not a student-oriented project.

Students who live in and frequent North City give it the vibrancy of youth, Levitt said, but he said, “We haven’t built a place for students.”

“This is a family place,” he said.

With its mix of housing, retail and entertainment venues, Levitt said North City will be an alternative for people who like the urban feel of downtown San Diego but loathe the commute.

“We have a little bit of everything,” he said.

Richard Rabines, who was the architect on North City with Taal Safdie, said the idea behind North City is “to create much more of a city for San Marcos” with “a combination of different ages.”

“We think this could be a place for families to live, seniors to live, and also young people to live,” Rabines said. “It’s a place where you can do so many different things and meet people doing things.”

North City is less than a mile from San Marcos City Hall, and city officials have enthusiastically supported the project.

“We’re putting all of our attention and efforts into making that the next downtown,” said Tess Sangster, San Marcos economic development manager.

North City “will complement the existing character of the surrounding area while offering new amenities for residents and students along with boosting business opportunity in that space,” Sangster said.

Levitt said he started acquiring property for North City about 15 years ago.

Initially, the idea was to build housing on the portion of the site to the west of Twin Valley Oaks Road, anchored by a large shopping center on the east side.

Plans were changed to fit the new environment.

The revised plans still call for North City to have a mix of townhomes and single-family homes east of Twin Valley Oaks Road.

Levitt said he’s negotiating with housing developers to build the townhomes and single-family homes, although he declined to say who they were.