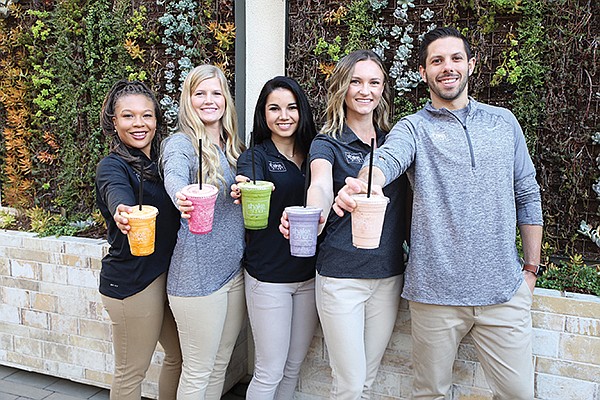 Kevin Gelfand credits part of the company’s success to his executive team, comprised of eight women. In the photo, from left to right, are: Jadah Stance, director of internal relations; Hilary Thielscher, San Diego regional director; Liana Gilkey, director of external relations; and Rheese Vasko, VP of operations. To the far right is Gelfand. Photo courtesy of Shake Smart Inc.

No. of Employees: Approximately 300

Description: A company that provides healthy, macronutrients-focused shakes for the on-the-go consumer 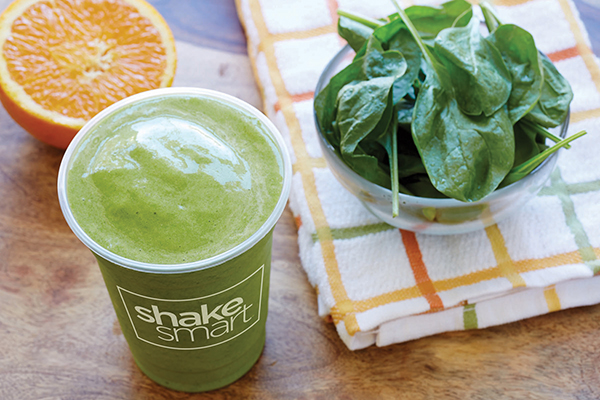 Shake Smart prides itself in using real food ingredients like fruits and vegetables and other macronutrients. Photo courtesy of Shake Smart Inc.

While some students his age might have been more inclined to explore the culture of alcohol consumption on campus, it was a whole other type of beverage that then 21-year-old Kevin Gelfand was craving.

“I was a student at San Diego State University and one day, when I was leaving the gym, I noticed there were no healthy food options on campus within that 30-minute optimal window post-exercise,” said Gelfand, now 29.

That was the aha moment for him sparking the idea for Shake Smart Inc., a company that provides healthful macronutrients-focused shakes for the on-the-go consumer.

With the help of Gelfand’s grandmother, who donated some of the initial funding, and student loans and savings that he and co-founder Martin Reiman had gathered, the young business partners opened the first location, a kiosk, in 2011 at their alma mater. It was the first time two students owned and managed a business on site. It wasn’t easy, Gelfand says, but the campus took a chance on them.

The shakes are a blend of fruit, vegetables, plus protein powder, and choice of milk. This means, no syrups, no purees, no sherbet.

Eight years later, Shake Smart has 13 locations nationwide, four of which are in San Diego County. Approximately 300 people are employed at those locations including those in the four stores that are licensed operations.

There are no investors. All Shake Smarts have been opened solely through debt financing, which the company is on track to pay off by the end of next year, according to Gelfand.

If the recent IBISWorld, Inc. report on juice & smoothie bars in the U.S. is any indication, Shake Smart and business like it will continue to grow in the next five years. According to the data released October 2017, despite the juice and smoothie sector being saturated, the industry has grown steadily in the last five years due to changing consumer preferences. California accounts for 20 percent or more of the smoothie and juice bar business in the United States.

Gelfand, who majored in business management with an emphasis in entrepreneurship, says the reason for the company’s success is, first and foremost, that it identified its target market early on.

After the first location opened, Gelfand and Reiman decided to step outside of the college scene and opened a store at Westfield Horton Plaza, just to test that market. That store closed shortly after, due to a bigger company wanting to move into its space, but Shake Smart was soon offered a location at Westfield UTC Mall, which it accepted. That was preceded by a store at Marine Corps Base Camp Pendleton and followed by another location inside the LA Fitness in Oceanside.

“Within three months — April, May and June in 2013 — we had opened three new stores,” said Gelfand, “so, we sat and analyzed which demographic proved to be the best: the mall, the college crowd, military base or the gym. We quickly learned the college market was the one.”

And, their assessment was right. Soon after they made that observation, due to the popularity of the first store, SDSU came knocking again, asking if they could open a second location there. This time it was a brick-and-mortar spot. And then, other campuses followed suit.

“We get paid from licensed stores via a licensee fee upfront to get them launched and then an ongoing percentage of sales royalty,” said Gelfand.

While Reiman amicably left his day-to-day, full-time role with the company earlier this year — mainly because he was not interested in expanding and wanted to take a break from working 70-hour work weeks — Gelfand says Shake Smart is still going strong. This is mainly due to the team of women, all under the age of 30, whom he has hired to help him continue to push the company forward, he says. Feldman says he’s proud to have a young staff and an all women staff at that. It’s progressive and not what he was advised to do early on, Gelfand said.

“Once you have a team that is comprised of grit and passion and determination, it is not just a matter of getting the right people on the bus, it’s getting them on the right seat,” Gelfand said. “You can only learn that by learning their personalities and then you can learn what position is right for them so that they can excel if they focus on the right objective.”

He also adds that while the minimum wage impact has definitely affected the business, staffing on the retail level isn’t difficult for him since he focuses on hiring college students.

“When minimum wage goes up each year, we are forced to raise our prices slightly and then customers are frustrated at that,” he said. “We have done a variety of things to try and absorb the minimum wage (ie. our Proprietary Self Order kiosk where customers take their own orders), but over the last few increases we have (deployed) other options to try and avoid price increases.”

Just last month, Gelfand appeared on the Forbes 30-under-30 list for the Food and Drinks category, and, in April, made the Inc.com Rising Stars 2018 compilation.

Moving forward, Gelfand says he has a BHAG, or a big hairy audacious goal, and that is to get to 20 locations nationwide by 2020.

“It may sound crazy, but, we think we can achieve it,” Gelfand said. “At the beginning of 2017, we only had six locations, with the goal of having 20 by 2020, and we were like, ‘it’d be crazy to triple our locations in three years’. Fast forward to the end of 2018 and we are already at 13 with two years left to go. In two years, we have over doubled our store count. Not only did we beat it, but, we beat it well.”

By the end of that same year, he also aims to have a Shake Smart presence in at least 12 states as well as be a $10 million revenue company.