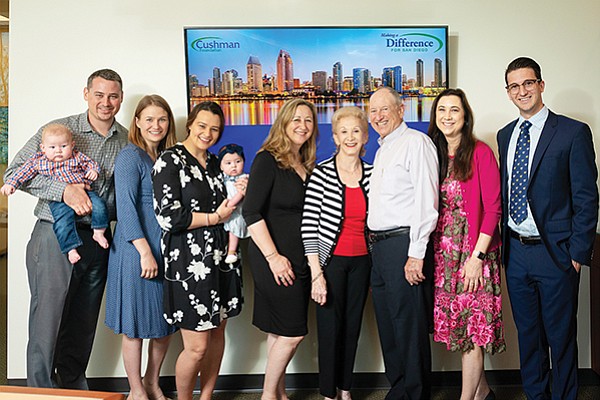 San Diego — The Cushman Foundation announced that it launched an initiative this year, “Making a Difference for San Diego,” to impact worthy organizations throughout San Diego County. The intention is to provide funding for much needed services to diverse communities and to elevate or create new programs that truly make a difference in the community. These gifts are a part of the annual giving platform of giving back to San Diego that began more than 30 years ago.

Steve Cushman, patriarch of the family, is on the San Diego Business Journal’s San Diego 500, The Book of Influential Business Leaders. He served as a commissioner for the San Diego Unified Port District from 1998 to 2010, has served on more than 70 boards. Visit cushenterprises.com.

A year ago, Hurricane Harvey hit the Houston area, devastating lives including those of “orphan” pets. The tragic day resulted in a lasting partnership between Helen Woodward Animal Center and several Texas shelters. Today, the center celebrates more than 100 orphan pets transferred from the Lone Star State to Rancho Santa Fe. One such orphan pet named Cooper was diagnosed with heartworm, but was hiding another more tragic part of his past. When medical staff at the center did X-rays to check on the severity of Cooper’s heartworm, they discovered more than seven buck shots in his chest, sides and back. It’s unclear whether Cooper was shot on various occasions or whether it happened at one time. It is clear that Cooper’s past was one of cruelty and abuse. Center Operations Director Jennifer Shorey opended her home to foster Cooper on his “long journey and treatment ahead,” she said.

Treating heartworm in dogs takes months of diligent care and costly medications. Donations can help Cooper receive the care he needs and will provide Helen Woodward Animal Center the ability to bring more Texas pets in need to the Center. Visit animalcenter.org/helpcooper.

The National Society Daughters of the American Revolution Rincon del Diablo Chapter preserved a bit of San Diego history recently by cleaning the historic marker denoting the San Pasqual Battlefield State Historic Park where the bloodiest California battle occurred during the Mexican-American War in 1846. In 1993, the chapter and the San Diego DAR District XIV donated and replaced the plaque in the original 1924 marker. The work is part of the DAR’s ongoing commitment to educate citizens and preserve history.

Liza Pille-Speacht, chapter regent, spearheaded the project to “recognize the sacrifices that our Revolutionary, Civil and present-day American troops have made.” Senior park aide Gil Garcia acted as docent and historian for the group and detailed the location’s significance to the United States’ expansion and San Diego history.