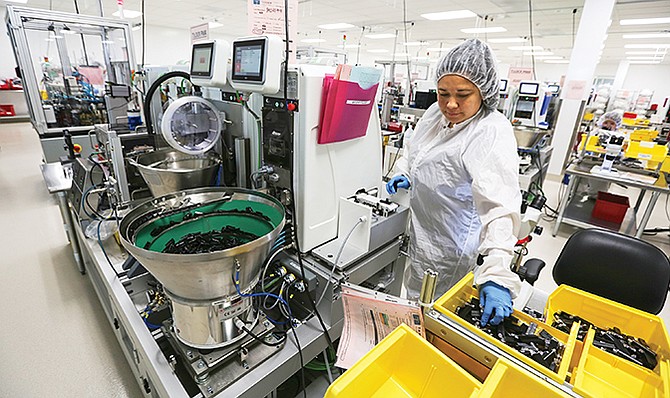 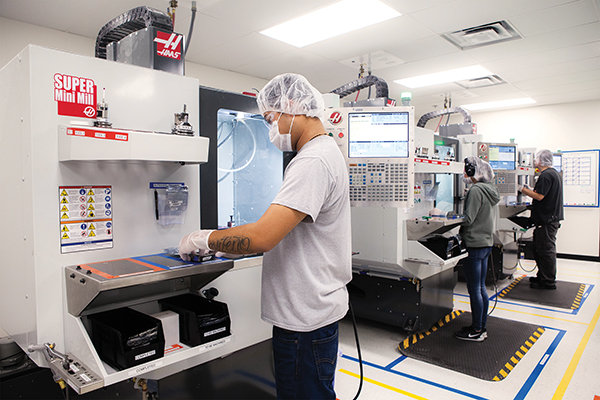 Khris Contemprato, an operator of Dexcom’s transmitter manufacturing line in San Diego, presses the start cycle on the computer numerical control mill to give the transmitter its final shape. Dexcom’s technology includes a sensor — typically on a patient’s abdomen — that measures just below the skin, and a transmitter relays glucose level data every five minutes to a smart device. File Photo by Melissa Jacobs

“There are only so many adjectives we can write to describe the progress this company has made in a year, so we will simply say ‘bravo’ on delivering a very good 2Q18,” said analyst Joanne Wuensch with BMO Capital Markets in an Aug. 1 research note, reiterating BMO’s outperform rating on the stock.

Most second quarter sales were derived from the company’s smartphone-linked G5 system, which enables diabetes patients and caregivers to quickly act in case of dangerous blood sugar levels. But Dexcom indicated the future is even brighter, since the end of the quarter saw the release of its G6 technology, which doesn’t require finger prick blood draws for calibration.

Dexcom now expects revenue of approximately $925 million in 2018, versus a prior company estimate of $850 million to $860 million.

In January, Dexcom partnered with insurer UnitedHealthcare on a pilot program to gauge whether its continuous glucose monitoring devices can help Type 2 patients better manage the disease. UnitedHealthcare sees potential to save on health care costs.

Under non-GAAP (Generally Accepted Accounting Principles), Dexcom reported a quarterly loss of $0.10 per share, better than the Zacks Consensus Estimate of a $0.20 a share loss. GAAP net income was $30.2 million, or $0.34 per share, according to Dexcom.

Operating margin improved to negative 41 percent, versus negative 89 percent during the prior second quarter.

One Tandem storyline to watch for in future quarters: The company in June won U.S. Food and Drug Administration approval for an automated insulin technology that lowers the frequency and duration of low blood sugar. It integrates with Dexcom’s G6.

Income from operations in the fourth quarter, according to the company, totaled $146.9 million, 15 percent higher than the prior year period.

ResMed said the company experienced growth across markets and its portfolio.

Along with winning strategies, San Diego medtech companies appear to be benefitting from favorable industry forecasts.

Moody’s cited innovative products finding new markets, as well as a suspension earlier this year of the 2.3 percent excise tax on medical devices.

NuVasive stated that net income was $11.5 million, or 22 cents per share, compared with 21 cents per share in the second quarter in 2017. Adjusted to exclude one-time items, earnings per share were 58 cents, in line with Wall Street expectations.