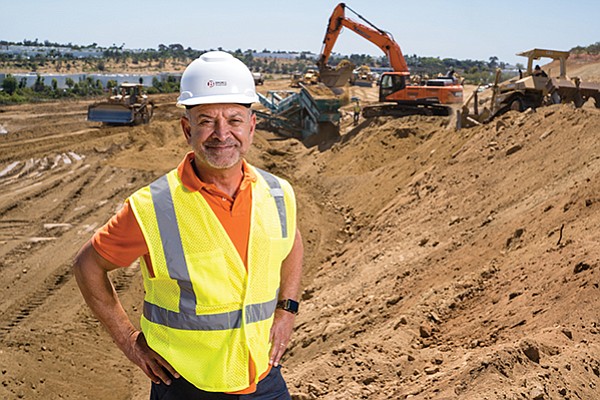 Badiee Development Inc. has experienced significant growth through industrial projects in North County, but founder Ben Badiee says the company is looking at possibly developing residential or mixed use projects in other parts of the region. Photo by Bob Hoffman Video and Photography

No. of Local Full-Time Employees: 6

San Diego — What’s better than being among the county’s fastest-growing private companies? Making the top 5 two years in a row.

With a 428-percent growth from 2015 to 2017, real estate development company Badiee Development Inc. landed in the No. 5 spot on this year’s list. Last year, the company took the No. 2 spot on the annual ranking that is compiled by the San Diego Business Journal.

“Badiee Development has achieved record success over the past few years by working to entitle and deliver more than half a million square feet of innovative industrial space in San Diego County,” said founder and CEO Ben Badiee. “Ultimately, this honor is a testament to the Badiee Development team who has worked tirelessly to propel our organization forward and achieve our goals.”

The La Jolla-based company, which formed in 2003 and employs six local full-time employees, generated $11.88 million in revenues in 2017.

Badiee advocates for a forward-thinking development approach, with a strong team of employees and consultants, and exceptional relationships in the community.

“In the past few years, Badiee Development was able to acquire several opportunities to build innovative commercial and industrial buildings ahead of increased demand from North County San Diego’s thriving innovation economy,” he said. “And without our capable team and relationships in the community, we would not have progressed on our projects forward in record time.”

The project was also named a Best Real Estate Deals this spring by the San Diego Business Journal.

Initially, the seller had been approved and begun grading nearly 11 acres, with a building on two separate parcels. The $11.5 million sale involved combining the two parcels into one, and the project was redesigned into a single building.

The processes were completed in about four months, much faster than the average time for such adjustments. The property has been fully leased to Veritiv.

Though the North County has proven fruitful to Badiee Development, the company is continually working on ways to expand into the rest of the county while continuing to serve the county’s northern region.

“In the coming months, we will have completed or begun construction on three industrial projects in Vista and Carlsbad,” Badiee said. “As we look beyond those opportunities, Badiee Development will be adding new product types including residential and commercial in different neighborhoods around the county.”

Could a third consecutive year on the list of fastest-growing private companies in San Diego County be in Badiee’s future? Quite possibly, according to Badiee.

“We’re certainly working toward a third consecutive year on the list,” Badiee said. “We value continually innovating and pursuing new ideas as well as enhancing our knowledge and education. Because of this core value, we never rest on our laurels but are always working to better ourselves, better our product and better the communities in which we do business.”