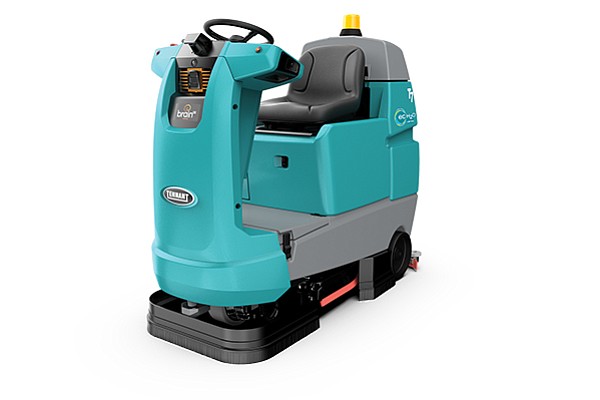 The specific machine chosen to be redesigned to work autonomously is Tennant’s T7 Micro-Rider product. Photo courtesy of Tennant Co.

The companies are developing an autonomous commercial floor scrubber expected to be available later this year.

Tennant Co. employs about 4,300 people and reported sales of $1 billion in 2017. The company’s senior vice president of global marketing, Dave Huml, said Tennant has kept an eye on the potential impact of robotics on the cleaning equipment industry for years, only in the last few years has the technology matured enough to make it a viable option for customers.

Previously, “we didn’t feel the industry was ready … it’s not just about the robot, it’s about changing the entire cleaning process,” he said.

“What our customers have been telling us consistently is, anything you can do to help me improve my ability to manage my labor is helpful,” he said.

Managing costs associated with employees can be especially tricky in the cleaning industry, where high labor turnover is common.

“Many industries have moved toward more automated solutions, and so they see the technology yielding benefits elsewhere, and they ask themselves: Why not in cleaning?” he said.

The San Diego-based company, once part of Qualcomm, is backed by Japanese conglomerate SoftBank’s Vision Fund and Qualcomm Ventures, the chipmaker’s venture capital arm. In 2017, the company raised $114 million from those entities in a Series C funding. Brain Corp.’s 100-some employees work out of an office in Sorrento Valley near the Qualcomm campus.

While AI isn’t new, significant advances in computing power and the availability of large datasets have made the technology more attractive in recent years to businesses in industries from energy to health care to automotive.

Major tech companies are in the midst of a race to acquire AI expertise; acquisition of AI startups rose nearly 44 percent in 2017 compared with the year prior, according to data from CB Insights. And AI talent is scarce.

“Tennant is a world leader in manufacturing cleaning equipment, but we’re really not a world leader in artificial intelligence or robotics, so we knew that we would have to partner to gain that expertise and bring it to bear on our products and our industry,” Huml said. “We’ve had an open dialogue with (Brain Corp.) and kept tabs on where they were going with their business model and their technology.”

Huml said the specific machine chosen to be redesigned to work autonomously is Tennant’s T7 Micro-Rider product, which functions across a number of industries.

“It remains to be seen what the rate of adoption will be in each of the vertical markets, so we wanted to enter with a product that was pretty versatile in terms of application,” he said. “You could see a T7 everywhere — from an airport to a shopping mall to a retail space to a commercial warehouse.”

John Black, a senior vice president with Brain Corp., knows firsthand what would improve efficiency in the cleaning equipment industry: He joined the San Diego robotics company after 15 years in that industry.

Black, who spoke via phone from a manufacturing and supply chain trade show in Atlanta, said Brain Corp.’s relationships with OEMs start with the companies working together to integrate its navigation kit into the manufacturers’ existing equipment.

Once the product is fully designed, “that’s when we turn on the software,” he said.

That’s what allows the machines, through a variety of sensors, to travel a preprogrammed route without a person guiding it. That means employees who once rode on or walked with the equipment as it cleaned would be freed up for other, more complicated tasks that aren’t able to be automated.

Brain Corp. earns its revenue via a software-as-a-service model.

But while the floor cleaning industry is where its technology is most widely used at the moment, Black said the company is eying a wide range of other areas in which it hopes to deploy its software.

“We’re actively engaged with a lot of potential partners in areas including material moving and people moving,” he said.

No. of local employees: More than 100