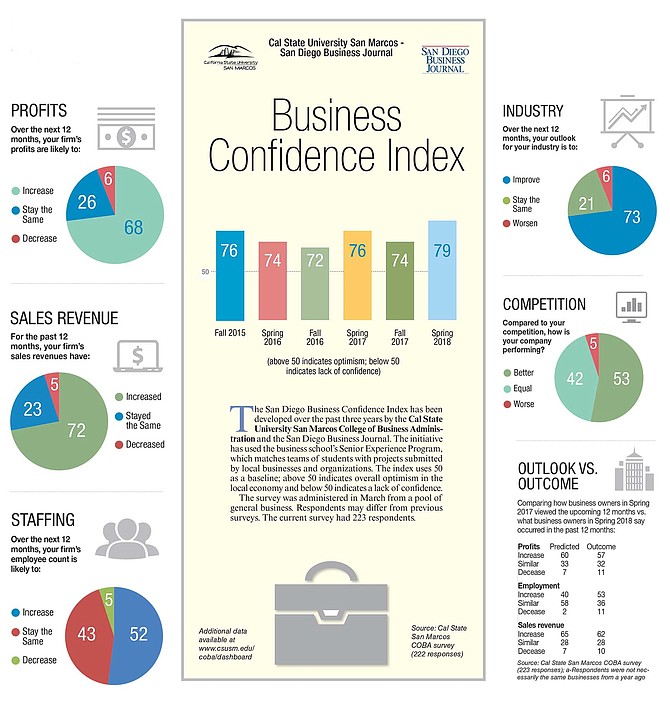 San Diego — San Diego businesses are feeling optimistic about the next six months, according to the San Diego Business Confidence Index. The spring 2018 results indicate a business confidence index (BCI) of 79 — that’s five points higher than the results of a similar survey taken in fall 2017.

This analysis has been developed over several years by CSU San Marcos College of Business Administration and the San Diego Business Journal. BCI is based on a company’s assessment of its current position and expectations for the immediate future.

So why are San Diego businesses feeling so good? According to Gregg Landers, managing director of consulting and internal control services of CBIZ Inc., it’s partly because of the economy.

“When companies can grow in a consistent and steady manner, they typically can do it more profitably than when (they) accelerate too fast,” said Landers. “They can typically manage their cash flow better and maintain more secure cash balances.”

The U.S. is in a “productivity” lead type recovery after the recession of 2008, according to Landers. Money is inexpensive for businesses to borrow. Employee wages haven’t risen dramatically and neither has inflation. All of these factors have helped businesses.

Politics have played a role too — the Trump administration’s tax overhaul has made businesses more secure in their finances.

“Regardless of your politics, it’s hard to argue that businesses are seeing the lower taxes and as a result are making bigger investments in their companies to grow,” said Landers.

For this particular index, 50 points is the baseline. Above 50 indicates overall optimism and below indicates a lack of confidence. The 223 respondents were mostly small businesses (50 employees or less) in San Diego.

Respondents were asked various questions about how their business was doing and what they predicted for the future. Some questions asked about whether or not their firm’s employee count, profits, revenue, and more have risen or dropped over the last 12 months.

Other questions asked employers what they expected to happen in the next 12 months in terms of their revenue, employee count, an overlook of their industry, and how their company fares against the competition.


The survey is conducted every six months; the pool of respondents was not the same as in previous surveys.

Landers said there are things that can derail a thriving economy and soaring business confidence however. Major geopolitical events that adversely affect the U.S. and European economy, data breaches, or “bad actor” involvement from foreign countries, to name a few.

“Most economists and business people I interact with, although recognizing that such events are always possible, don’t see anything like that on the likely horizon,” said Landers.