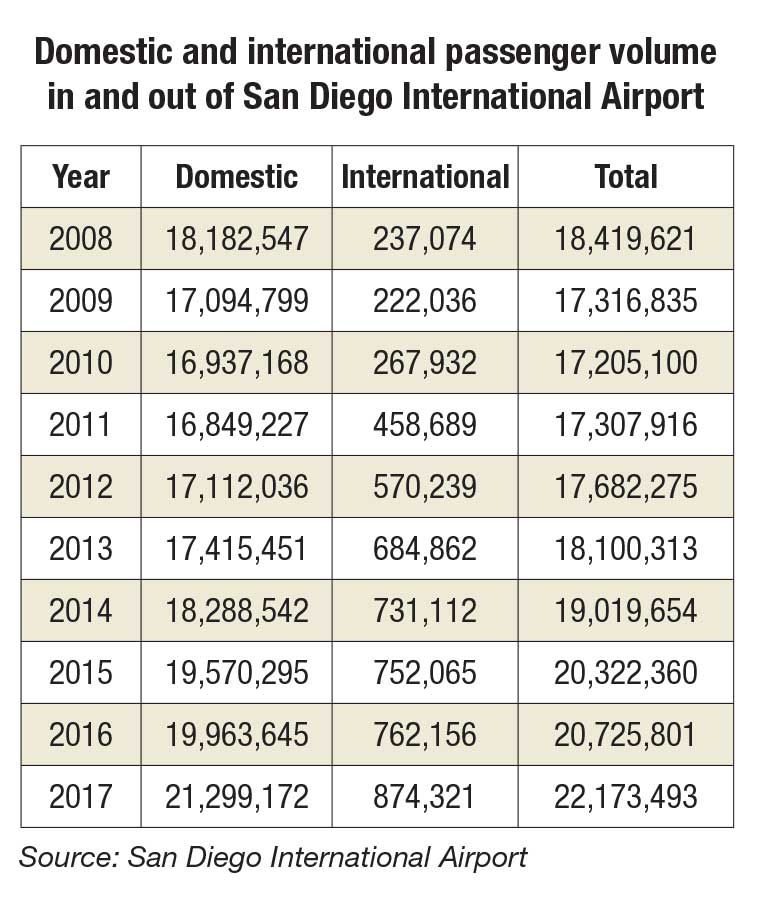 Meanwhile, the San Diego Tourism Authority and airport officials continue to work on plans to improve international travel in and out of San Diego, linking the city to desirable destinations like Latin America and China.

Lawrence Ryan, senior director of U.S. sales for Lufthansa Group, said Lufthansa monitored the market and determined that there was a demand for both leisure and business travelers to come from Europe to San Diego.

“We presently have customers in Europe who travel to San Diego regularly either via Los Angeles (or) via one of the hubs in the U.S.,” said Ryan, adding that corporate demand is there and business travelers were looking for a better solution. Frankfurt has one of the biggest and busiest airports in Europe.

The direct flight will be available five times per week, on Monday, Tuesday, Thursday, Saturday, and Sunday. Flights are scheduled to depart San Diego these days at 3:05 p.m. and arrive in Frankfurt at 11:20 a.m.

Lufthansa Group announced last year it would be adding this direct flight to its service. The announcement came after German company Condor Airlines stopped offering its Frankfurt to San Diego nonstop in September 2017.

“It’s a process, it’s not something that can happen overnight,” said Joe Terzi, CEO and president of the San Diego Tourism Authority.

Terzi says the Tourism Authority came on board with the project this past year and worked on marketing San Diego as a destination in Germany. For past direct international flights, the body spent around half a million dollars marketing British Airways’ direct London to San Diego flight overseas and more than $300,000 marketing Japan Airlines’ direct Tokyo to San Diego flight in Japan. The authority has spent $250,000 marketing Lufthansa’s flight overseas so far but expects it might spend more.

Hampton Brown, senior director of air service development at San Diego International, said Lufthansa was provided with several different profiles and business cases on San Diego to aid its decision. The airport worked with the San Diego Regional Economic Development Corp., the World Trade Center, and the Tourism Authority to put together profiles on San Diego’s demographics, its corporate make up, and leisure market to present to Lufthansa.

Brown says the airport is hoping on establishing better Latin America connections, and directs to China, the Philippines, and Oceania. The most challenging to establish may be China and Oceania, but overall he sees international travel in and out of San Diego positively.

“Our international numbers went up quite significantly,” said Brown. “International passenger volume rose 14 percent from 2016 to 2017.”

To accommodate international travel, San Diego International is scheduled to open a new, larger federal inspection facility for international flight arrivals at the west end of Terminal 2 this summer. It’s estimated to be 130,000 square feet and will increase the number of international gates from three to six.

Direct flights to Oceania, which include Australia and New Zealand, are difficult because there are few aircrafts available that can make the long trans-Pacific flight.

Standing in the way of a direct San Diego to China flight is the status of existing trade and travel treaties between the U.S. and Chinese governments. There are no more available flight allotments to China’s largest cities including Beijing and Shanghai.

Despite the hurdles toward getting a direct China flight, tourism officials continue to market San Diego as a destination in China and are also focusing on the Cross Border Xpress (CBX) as an important asset to increase San Diego tourism.

CBX is an airport terminal in Otay Mesa with an access bridge connecting to the Tijuana International Airport. About 1.9 million passengers used CBX in 2017, its second full year of operation. Currently Tijuana International offers a direct flight to Beijing via Aeromexico, meaning those passengers can easily visit San Diego using CBX. However, these aren’t the only visitors that the Tourism Authority is targeting.

Officials said they’re working with Grupo Aeroportuario del Pacífico, the Mexican airport operator that runs Tijuana International, on marketing San Diego in Mexico as a destination and using CBX to get there. In 2015, the latest year for which data is available, Mexican visitors made up 356,000 overnight visitors—making them a priority market for the Tourism Authority.