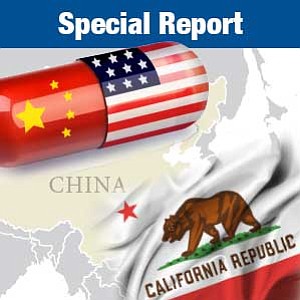 In the past 18 months, deal after deal has been announced with involvement from Chinese investors — a new trend for local life science companies that historically received very little cash from that part of the globe.

But it seems the tightening of intellectual property rules in China, along with loads of government incentives, has cultivated a boom in China’s life science industry that’s starting to bleed into San Diego’s economy.

Most recently, Epic Sciences announced a $40 million financing round earlier this month with money coming in part from Shanghai-based Hermed Capital.

Before that, local VC fund Avalon Ventures joined forces with two Chinese funds — Lilly Asia Ventures and Vivo Capital — on an $18 million round for Fortis Therapeutics. And BioNano Genomics, which teamed up with Beijing’s Legend Capital on their Series C in 2014, is now working with two Chinese investors (Legend and Ping An Ventures) on their current Series D.

“Chinese financing for biotech is new for San Diego; I’ve only noticed an uptick for the past one or two years,” said Nikia Clarke, executive director of World Trade Center San Diego.

Clarke is perhaps unusually attentive to the trend. While getting her Ph.D. at the University of Oxford, her research focused on the large uptick of Chinese outbound investments into foreign markets. She said she was surprised to see very little Chinese investment in San Diego when she moved here in 2015.

“I later realized that San Diego’s core industries are knowledge-based, and China only recently matured in those areas,” Clarke said. “China’s intellectual property laws have evolved considerably in the last five to seven years.”

Now, she said, teaming up with Chinese investors is a less risky enterprise than it once was.

‘Piles of Cash’ in China

Chinese investors have historically been titans of industries such as real estate, forestry, and mining, said Jay Lichter, managing partner of Avalon Ventures. But now these investors are often depositing their cash into biotech venture funds.

“These are not your traditional LPs (limited partners) like you see in the U.S.,” said Lichter, who met with several interested investors on a recent trip to China. “They’re kings of rubber and industries that have nothing to do with life science or venture capital. But they have piles of cash and they want to diversify.”

Clarke added that the biotech boom in China has also churned out mature, homegrown life science companies in China, who are just now engaging in mergers and acquisitions, along with outside investments in technologies.

“Only recently did these knowledge-based industries upgrade to a point where they have capital available to acquire technology and expertise in pharma, biotech and health care,” Clarke said.

It makes sense why China is investing in biotech, but why San Diego biotechs? Lichter said it’s simple: San Diego needs money, and companies here are more accessible than companies in other biotech hubs such as Boston and San Francisco.

“San Diego is one of the largest biotech hubs in the world, but there’s a very small number of VCs here locally,” Lichter said. “Companies here are happy to have investment partners.”

From the local biotech’s perspective, there’s another bonus to teaming up with Chinese investors, said David Diamond, a CPA and business consultant at Mayer Hoffman McCann P.C. Diamond, who specializes in life sciences and foreign markets, said local companies often team up with international investors so that they have help navigating foreign markets.

“The genomics market in China has grown substantially, and we predicted that it was going to be a very large market for us,” Holmlin said. “So we wanted Chinese investors who could help us navigate commercialization and other aspects of having a Chinese footprint.”

Their investors delivered. About 35 percent of BioNano’s current revenue comes from the Chinese market.

But local biotechs have encountered some challenges while teaming up with Chinese investors. After speaking with several CEOs who sought investment in China, these three complaints consistently arose: language barriers, difficulty vetting investors, and delays, delays, delays.

“There can be enormous delays,” Holmlin said. “By now, I could be a world expert on these delays, and I’m not happy about that.”

Both Clarke and Holmlin said these delays often have to do with the strict regulations in place governing the expatriation of Chinese currency for overseas direct investment.

“For the past 10 years it was like an open faucet, but now the government is putting boundaries around that,” Clarke said. “There have been quite a lot of murmurings about difficulties getting capital out of China.”

Holmlin suggests seeking out investors who already have U.S. dollar accounts outside of China to avoid this issue.

But before local biotechs even have to worry about delays, they have to find potential investors. And vetting an investor from China, without having a personal network there, can be nearly impossible.

“Deal-making in China is very tough,” Lichter said. “It’s a gigantic pool of opportunities. There are 20 million people in Shanghai, and it’s a ‘biotech cluster’ in the loosest form of the word.”

“Because this is all very new, the network in San Diego is still limited,” Clarke said. “Big guys like WuXi (PharmaTech) have led venture rounds for a few companies in San Diego, so the networks locally will get better with time.”

Despite the hurdles local biotechs may need to jump, Holmlin and Lichter both said the risk is coupled with big opportunity.

“There’s no such thing as a free lunch,” Holmlin said. “China will have its own idiosyncrasies, but it’s a great source of capital and strategic partnerships. I encourage people to really seek it out, but go there with eyes wide open.”