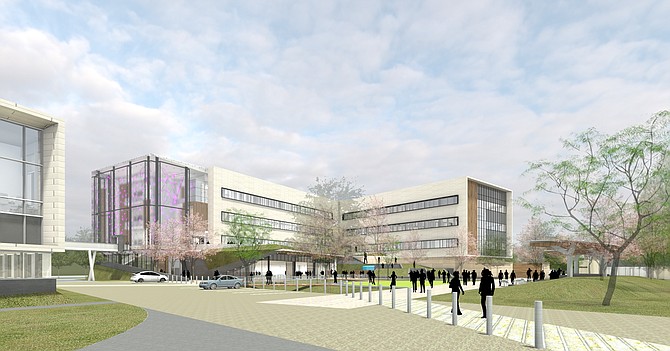 San Diego-based Biotech firm BioLegend Inc. has begun work on a new campus in Miramar, with an expected project cost of more than $100 million.

A company spokeswoman said a ground-breaking was held Aug. 2, and completion of the project is expected in the second quarter of 2019. BioLegend will be relocating from its current headquarters on Pacific Heights Boulevard in Sorrento Valley.

The campus at completion will have four buildings including office and lab space, with approximately 250,000 square feet of outdoor amenities. There will be a seven-story, 700-space parking garage.

The project includes a complete overhaul of three out of four older buildings along Terman Court that BioLegend acquired in late 2015 for $24 million, according to CoStar Group and public data. Much of the space, originally constructed during the 1980s, had previously been occupied by Sony Online Entertainment.

One of the acquired buildings has since been demolished, and will be replaced by a new campus building and the parking structure, the BioLegend spokeswoman said.

The eight-acre location is off Terman Court near Camino Santa Fe. The San Diego Planning Commission recently approved the vacation of Terman Court, which will be renamed One BioLegend Way, according to project manager Nik Bandak of Hughes Marino.

The general contractor is DPR Construction, and the architect is Delawie.

A BioLegend statement said the project will include a green roof with picnic tables, and there will be bridges leading to a “massive center circle” that doubles as a lunch area during the day and an event space in the evening. A 500-person multi-purpose room will be situated under the green roof and will have large bi-folding doors for access during inclement weather.

The main building will have a large atrium, leading to upper floors containing labs, creative offices, break rooms and conference rooms. Lab space will be laid out with open floor plans to encourage collaboration while maintaining safety standards.

Officials said the campus will also have a new kitchen and gym.

According to its website, BioLegend was started in 2002 and develops cutting-edge antibodies and reagents for biomedical research, with expertise in areas including cell biology, immunobiology and neuroscience. The company also has operations in Europe, Taiwan and Japan.