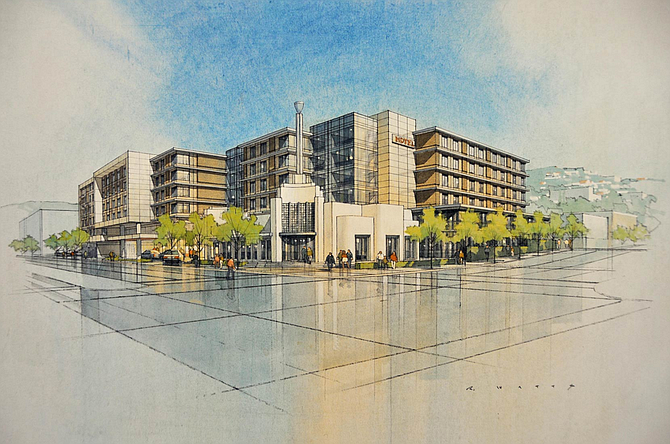 A statement from Newport Beach-based T2 said the campus at 2137 Pacific Highway includes a 204-room Hilton Garden Inn and 160-room Homewood Suites. The attached hotels will be serviced by a shared front desk, two open-air courtyards and other common areas.

There will also be a 24-hour Pantry Market, a business center, fitness center, rooftop pool, and 2,300 square feet of flexible meeting space to accommodate up to 300 people. The property’s general manager is Mark Ziomek.

Hotel operators also plan to partner with the Little Italy Association to create a Tom Fat Memorial Plaza, honoring the businessman and second-generation restaurateur who operated local venues including the Fat City steakhouse for several years.

The site in more recent years housed the China Camp restaurant and a Denny’s. The new hotel’s design retains some art-deco elements, harking back to the days when Tops Nightclub operated at that location starting in the 1940s.

T2 Hospitality, which owns and operates several hotels in the local market, is not disclosing the exact development cost for the new Hilton campus.