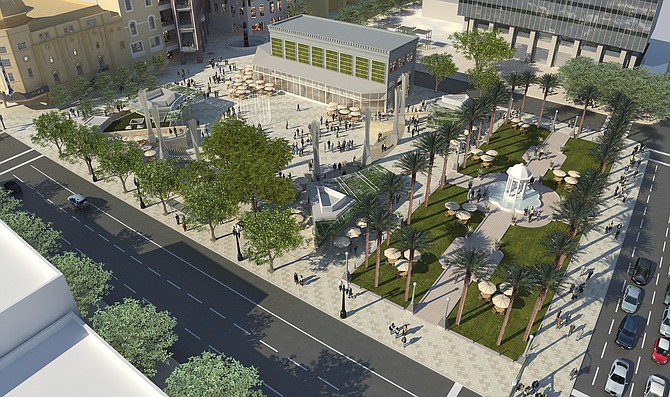 A May 4 opening is scheduled for the redeveloped Horton Plaza Park, a new urban plaza and public gathering space next-door to Westfield Horton Plaza in downtown San Diego.

In development since 2012, the park has been developed through a 25-year partnership between the city and mall operator Westfield Corp., in which Westfield will manage the 53,000-square-foot facility and schedule events and other programming. The park has capacity for more than 5,000 people.

A Westfield statement said the company will initially activate the park with 75 scheduled events, which will eventually grow to 200 events annually. Regular activities will include lunchtime concerts, cultural festivals, holiday celebrations, weddings and movie screenings.

Tenants signed so far for the park’s three food and beverage pavilions include Starbucks, Bruxie and Sloan’s Ice Cream. Each pavilion will have a trellised patio and seating.

The park’s Irving Gill Fountain, among the city’s oldest landmarks, has been restored to its original condition from the early 1900s. There will also be an amphitheater for live performances, an interactive pop-jet fountain and eight, 23-foot-tall light sculptures with color-changing features.

A free public ceremony on May 4 will officially open the park, with art, music and other live entertainment.