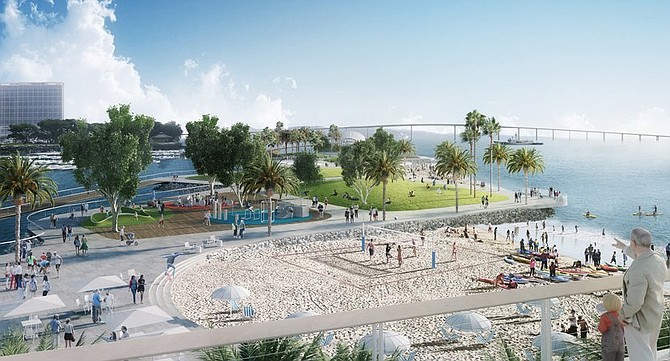 The Unified Port of San Diego has released six proposals for developments targeting 70 acres of prime downtown San Diego waterfront property, including the current site of the iconic Seaport Village.

Port officials have scheduled a public open house for June 13 and 14, from 3 to 7 p.m., at the San Diego Convention Center, to display and discuss the proposals. They include:

-- Plans by a locally based group known as Protea Waterfront Development for a project including hotels and retail; a ride called The Spire; an aquarium; and a museum with virtual-reality features from the media and business arm of the Smithsonian Institution. Estimated cost is $1 billion.

-- A proposal by a group that includes San Diego’s Manchester Financial Group and Dealy Development for a hotel, performing arts hall, retail and offices, and a gondola ride called San Diego Spinnaker. Estimated cost is $700 million.

-- A proposal by Seattle-based Great Western Pacific and Santa Monica Seafood for Tuna Harbor Pavilion, including a Ferris wheel on a fishing pier, a fly-over ride called “Wings over the Pacific Coast,” a maritime history-themed ride, and a multi-concept restaurant and retail pavilion. Estimated cost is $130 million.

A Port of San Diego statement said the district will be accepting comments on the proposals through June 28, with more information at portofsandiego.org.

May 2 was the deadline for developers to submit proposals, and port district staff anticipates formally presenting recommendations to commissioners in August. The port district has not committed to a formal timeline for project selection, construction and opening of new elements.

Seaport Village opened in 1980, and the port district last year rejected a proposal by current operators to redevelop the property, as officials seek to maximize revenue generated by prime waterfront spaces. The current lease on the Central Embarcadero waterfront site expires in September 2018.