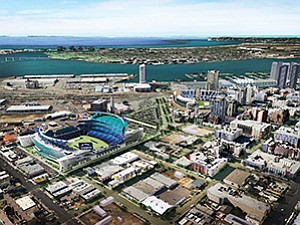 Rendering courtesy of San Diego Chargers The Chargers in 2010 put forward this concept proposal for an East Village stadium, expected at the time to cost $800 million. The plan was scrapped after the state abolished community redevelopment funding that might have supported the city’s portion of the tab.

San Diego — A San Diego Chargers stadium and an expanded convention center have been seen as competing downtown priorities for the past half-decade, both struggling to gain mass support...