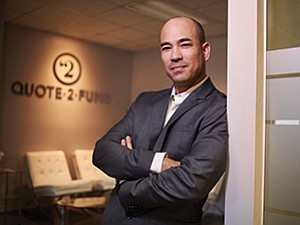 When Jules Dalsey founded Liberty Capital Group a decade ago, his business model was straightforward: seek out small businesses looking for equipment financing, learn their stories and connect them with banks or other funding sources most likely to issue a loan. Since 2010, the company has originated $100 million in loans.

Nonbank lending has boomed since 2008, attracting hundreds of millions of dollars in venture capital and even prompting some talk of overextension. Amid that explosive growth, smaller-scale companies such as Liberty feel the pressure to keep pace.

So Dalsey is in the midst of launching a sister company this month called Quote2Fund that will move Liberty’s offerings closer to mega alternative lending marketplaces such as OnDeck Capital. Dalsey brought on Bank of the Internet co-founder Mike Berengolts to lead the nascent company’s programming and technology efforts.

Quote2Fund will give applicants a series of possible offers based on some initial information about their businesses.

“An upfront quote makes the whole process more transparent,” Dalsey said. “It eliminates rate sensitives and tire kickers,” he said, referring to potential borrowers merely window shopping or uninterested in higher interest rates. Alternative lenders offer a tempting proposition for many small business owners who are either turned away from traditional banks or don’t want to wait weeks to get approved for a loan: potentially hundreds of thousands of dollars in a matter of days, albeit tied to a higher interest rate.

Some of the largest players, including Lending Club and OnDeck, were valued at over $1 billion during their IPOs late last year, though their stock prices have since fallen sharply. But there is still significant interest in the market, buoying several local companies. Dealstruck received $10 million in debt financing from Community Investment Management in July, while National Funding got its $30 million line of credit from Wells Fargo extended to $75 million this month.

National Funding’s revenues have nearly tripled in the past three years to a projected $67 million in 2015. It hired 50 new employees in the first eight months of the year, bringing it to 150 workers, and plans on doubling its office space next month to accommodate even more. The added credit should allow the company to increase originations from $300 million this year to $400 million next year and potentially raise maximum loan sizes from $500,000.

“It’s a fairly material increase,” CEO Dave Gilbert said of the Wells Fargo extension. “The market for short-term working capital has been on fire the last couple of years.”

National Funding has been around since 1999, before the recent alternative lending spike, carving out a niche in bridge financing. Gilbert predicted the intense investor interest in the industry would soon lead to a lending bubble as more entrants clog the market.

“You’re seeing some of the oversaturation now,” Gilbert said. “There will be consolidation over the next two years because either the margins won’t support them or the cost of acquisition will be too high. I don’t think you’re far away from seeing that happen.”

One of the newer lenders is Bond Street, a New York-based company founded by Chula Vista native David Haber last year. Haber spent several years in venture capital before starting Bond Street, which offers loans payable over up to three years at interest rates between 6 percent and 25 percent. The lower end of those rates is competitive with banks’, but the added speed can allow business to potentially open a new location or pay down debt months earlier.

Earlier this year, Bond Street raised $10 million in equity from Spark Capital and Jefferies Group, among others, along with $100 million in debt. The company declined to detail its origination volume, but said it plans to deploy the new credit in the next 18 months.

Haber conceded the market for alternative lenders is increasingly crowded, but said his company would still stand out by offering a more efficient product with added value. By collecting borrower data, for example, Bond Street could share with customers the average margin for raw material costs in various industries based on past loans.

“Our dollars are just as green as Dealstruck’s, Citibank’s, Wells Fargo’s,” Haber said. “Even if any of them offered the same loan at the same rate, or even cheaper, why should they be picking Bond Street? We focus on customer experience at every touch point.”

A Fraction of Overall Market

Colleen Poynton, vice president of Core Innovation Capital, said alternative lenders are still just a fraction of the overall loan market, lending billions of dollars in a market sometimes pegged at around $1 trillion. Newcomers aren’t necessarily competing with other alternative lending companies, but more traditional players such as Citibank or Capital One, she said.

“They’re still a rounding error with 0.2 percent of total origination volume,” Poynton said. “The name of the game very quickly becomes differentiated channels of acquisition and an ability to create either brand allegiance or some kind of sticky hook.”

The small business alternative lending market is especially fragmented, she said, making it hard for borrowers to suss out which option is best for them. Acquisition costs can be as high as $1,000 per lead, which isn’t sustainable without repeat business, according to Poynton.

Some companies, including Fundera and Lendio, allow potential borrowers to compare a host of alternative lending options and make recommendations based on the user’s profile. One of Lendio’s backers is Dinkar Jetley, a co-founder of Pivot Investment Partners and the former head of worldwide securities for JPMorgan Chase. He said there is “seemingly endless” startup activity around alternative lending, which is potentially worrying given how similar many of the companies are to each other. While profits appear steady now and originations are meeting expectations, the true health of the market won’t be apparent until interest rates rise, Jetley said.

“These kinds of marketplaces still need to withstand the test of time and live through a full credit/business/interest rate cycle,” Jetley said. “What happens to the performance of those loans? Do they hold up? Many are very reliant on wholesale funding sources.”