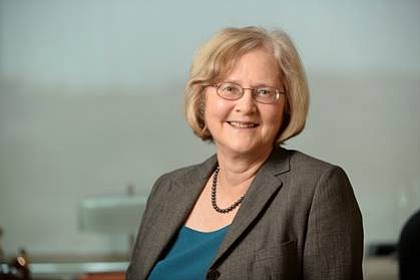 Blackburn, a pioneering molecular biologist and highly respected leader in the scientific community, will join the Salk Institute from the University of California, San Francisco, where she is a professor in the Department of Biochemistry and Biophysics. She will assume her new role at Salk at the first of the year, but is no stranger to the institute. Since 2001, she has served as a Salk nonresident fellow, one of a group of leading scientists who advise the institute’s leadership and play key decision-making roles in the appointment and promotion of Salk professors.

As Salk’s president, Blackburn will take the helm of the institute’s scientific enterprise, leading a team of scientists in fields such as cancer, neuroscience, aging and plant biology.

“Few scientists garner the kind of admiration and respect that Dr. Blackburn receives from her peers for her scientific accomplishments and her leadership, service and integrity,” said Irwin M. Jacobs, chairman of Salk's Board of Trustees. “Her deep insight as a scientist, her vision as a leader, and her warm personality will prove invaluable as she guides the Salk Institute on its continuing journey of discovery.”

Blackburn won the Nobel Prize in Physiology or Medicine in 2009 for discovering the molecular nature of telomeres, the ends of chromosomes that serve as protective caps essential for preserving genetic information, and for co-discovering telomerase, an enzyme that maintains telomere ends. Both telomeres and telomerase are thought to play central roles in aging and diseases such as cancer, and her work helped launch entire new fields of research in these areas.

In addition to the Nobel Prize, Blackburn has received nearly every major award in science, including the Lasker, Gruber and Gairdner prizes. She was named to the TIME 100 in 2007, the magazine’s yearly list of the most influential people in the world. She is a member of numerous prestigious scientific societies, including the National Academy of Sciences, the National Academy of Medicine and the Royal Society of London.

Blackburn has served as president of both the American Association of Cancer Research and the American Society for Cell Biology, and has served on the editorial boards of several scientific journals, including the influential journals Cell and Science.