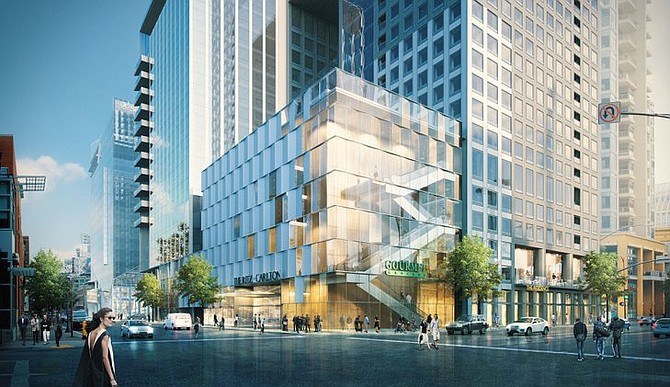 Cisterra Development of San Diego has proposed an East Village mixed-use project that would include 205 residential units and a 160-room, five-star Ritz Carlton hotel, according to Civic San Diego.

A selection committee of the city’s downtown project oversight agency is recommending that the Civic San Diego executive board enter into exclusive negotiations with Cisterra to develop the site at Seventh Avenue and Market Street.

The developer’s 751,5000-square-foot proposal also includes 46,000 square feet of retail space, some of which might be occupied by a gourmet grocer, according to a Civic San Diego statement. The residential units would include 58 for-sale condominiums, 115 market-rate apartments and 32 affordable apartments.

The selection committee is also recommending Civic San Diego approval of a proposal by Vancouver, Wash.-based Holland Partner Group for a mixed-use project at Park Boulevard and Market Street in East Village. That 550,000-square-foot development would include 341 apartments, 51,700 square feet of office space and 22,900 square feet of retail space.

Officials said Civic San Diego received several proposals after putting out a request for proposals for the development sites earlier this year. The agency’s Real Estate Budget/Finance & Administration Joint Committee is expected to review both recommendations on July 15.

Cisterra Development built downtown’s DiamondView Tower and is nearing completion on a new headquarters tower for Sempra Energy, both in East Village.