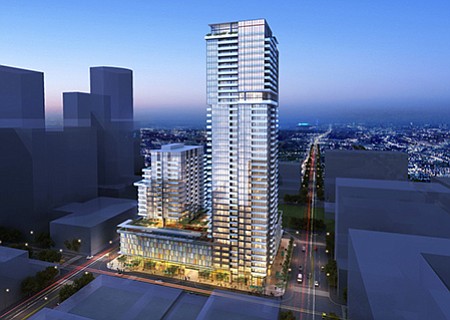 The proposal calls for approximately 600 residential units, 22,000 square feet of commercial space and 950 parking spaces in four levels. Those elements would be contained in a 41-story tower and a 21-story tower.

Founded in 2008 by Brad Termini and Dane Chapin, Zephyr Partners announced the acquisition of the 60,000-square-foot downtown site in June 2014, for $21.1 million. Developers said the mixed-use project would involve demolition of several older and underutilized commercial buildings on the site, in an area between downtown’s Gaslamp Quarter and financial district.

Zephyr Partners is also currently at work on projects including The Park, a $100 million, high-end condominium and townhome development in Bankers Hill.

Joseph Wong Design’s local projects have included the Hilton San Diego Bayfront hotel, the upcoming Broadstone at Makers Quarter apartments, and several other education and hospitality buildings. Lifescapes International also did recent work on the downtown Hilton, as well as The Fillmore music venue in San Francisco and The Grove retail center in Los Angeles.