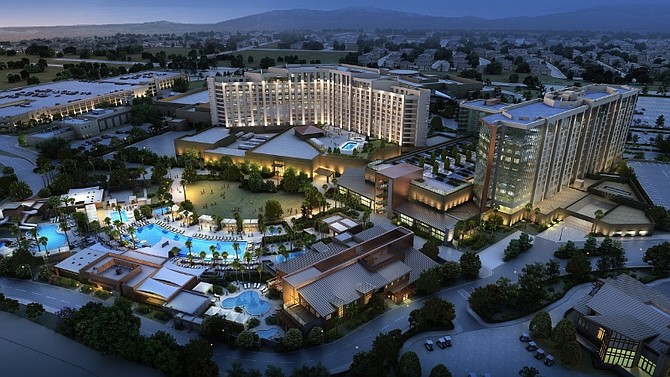 The Pechanga Band of Luiseño Indians broke ground Dec. 16 on a $285 million expansion that will double the size of its resort near Temecula.

Construction on the complex is expected to last two years. The project will add a hotel wing with 568 rooms and suites, 67,000 more square feet of event space, two new restaurants, a resort-style pool complex with eight pool areas and a freestanding spa and salon.

Pechanga is the largest casino-resort in California, with more than 3,400 slot machines. Attractions also include table games and golf.

The Pechanga Indian Reservation is in Riverside County, but the tribe’s resort is less than a mile from the San Diego County line. Several North County casinos compete with Pechanga for the same pool of concert-goers, day-trippers and vacationers looking for a getaway with casino gaming. There are eight casinos in San Diego County, and most have hotels.

After the project is complete, Pechanga will have 1,090 hotel rooms, 13 restaurants and 13 pools. The business expects to employ 4,560 people when the addition is complete.