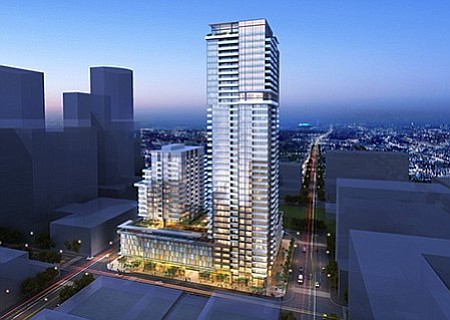 San Diego-based Zephyr Partners announced that it has sold the full-block property that it had designated for a planned mixed-use downtown project, known as The Block, for $33 million to Bosa Development.

Vancouver, B.C.-based Bosa, led by President Nat Bosa, has developed several high-rise residential condominium projects in downtown San Diego. It is currently at work on Pacific Gate, a 41-story luxury condo tower near the intersection of Broadway and Pacific Highway, with plans in the works for a similar-sized tower at a nearby site.

In a statement, Zephyr officials said the company has sold the 60,000-square-foot mixed-use site on Broadway, between Seventh and Eighth avenues, to the Canadian developer. It is one of the last remaining full blocks available downtown, and housed several older and underused commercial buildings at the time it was acquired by Zephyr in June 2014, for $21.1 million.

Zephyr Partners subsequently announced plans for a $250 million mixed-use project at that site, called The Block, obtaining city approvals for 498 residential units and adjacent commercial space and parking, with elements contained in a 41-story tower and a 21-story tower.

Zephyr co-CEO Brad Termini said the decision to sell is the result of an ongoing relationship with Bosa Development. “Because of Nat Bosa’s significant interest in the downtown Broadway corridor and his key role in the renaissance of downtown San Diego, we believe he is the ideal person to continue the project and make our dream a reality,” Termini said in the statement.

Under Bosa’s direction, Termini said several 1950s-era retail, parking and office structures will be demolished to make way for a mixed-use retail and residential community. The project is expected to maintain Zephyr’s commissioned design by architect Joseph Wong.