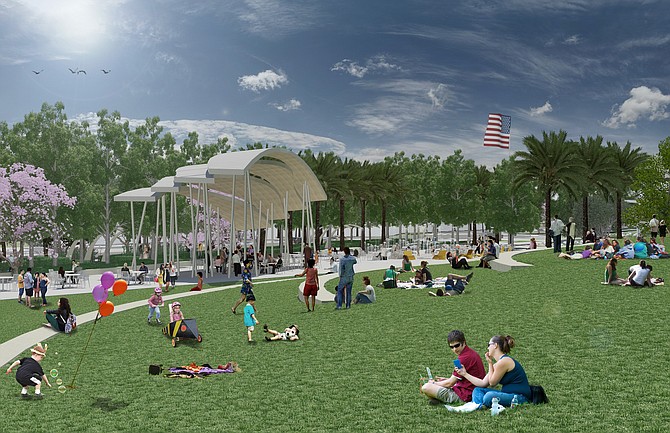 Sudberry officials said the 14.3-acre public park, at the intersection of Civita Boulevard and Russell Parkway, is designed to serve as the centerpiece of the community, with input from consultants, residents and the city of San Diego.

The multi-level park will cascade down the former quarry site and was designed by Schmidt Design Group Inc. of San Diego. Planned elements include a large central plaza, rose gardens, an outdoor grassy amphitheater, and a military tribute with a 100-foot-tall flagpole.

There will also be a recirculating interactive water feature and a game area with chess, ping pong and other activities. Sudberry Vice President and Senior Project Manager Mark Radelow said new trails will link the park to surrounding neighborhoods.

The park is being built in four phases, with a casual sports field, basketball courts and community gardens now under construction in the first phase. The park’s southern and eastern borders will feature a tree-sheltered promenade, and a dry streambed and walking trail will run the length of the park along the western edge.

Radelow said the natural-looking streambed will function as a biofiltration system that will clean storm-water runoff before it reaches the nearby San Diego River. Upcoming park elements include a dog park, separate children’s play areas, picnic grove, interpretive gardens, scenic lookouts and restrooms, with a plaza showcasing the site’s mining-related history.

Sudberry Properties is the master developer of the multiphase, 230-acre Civita, which broke ground in 2010 and is expected to entail more than $2.5 billion in investment by Sudberry and its guest home builders over the course of 10 to 15 years.

Civita is slated to include more than 4,700 homes and apartments at full buildout, and several of those have been completed and occupied. Office, retail and other civic amenities are planned for future phases.